Kerr Hall is located on the west side of the Quad, between Wellman Hall and Wickson Hall. It was built in 1969. This building formerly housed the offices of the Davis Honors Challenge which moved to Surge III, and the Mathematics and Statistics departments, which moved to the new Mathematical Sciences Building.

Following extensive renovations intended to make to building more compliant with California building code, new occupants moved in 2009. The first floor house the California History Project as well as TA offices and the Computational Communication Lab. The second floor is home to the Linguistics Department. The third floor houses the Communication Department. The fourth floor is made up of the administrative offices shared by all the departments in the building, and the fifth and sixth floors hold the Political Science Department. Kerr Hall is named for Clark Kerr, 12th President of the University of California.

During its disuse, the building was a prime spot for: the cleanest bathrooms and Urban Exploration

At seven stories high, it is one of the tallest buildings on campus and in Yolo County. Kerr Hall also proudly sports the antenna for KDVS on its rooftop.

If you're ever in need to fight a medieval war on campus, Kerr would be an ideal location to set up a defensive front for the following reasons:

During medieval warfare, of course, you'd likely not have access to modern clocks, which is why the sundial in front will come in handy. This sundial is officially known as Meyer Sundial. 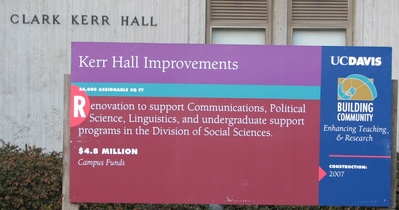 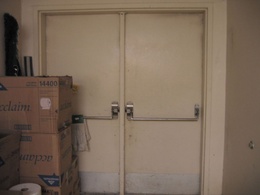 The entrance to the pathway between Kerr and the basement of Wellman.

A cool and freaky thing about Kerr Hall is the tunnel that connects it to the basement of Wellman Hall. There is, however, a lock on the door between them. The trick is that this lock is one-way, and you can always enter Wellman from Kerr, if you happen to be in Kerr when Wellman is locked up . In addition, the door to the basement is now locked, preventing access to the tunnel.