Kerry Rowland-Avrech relocated to Davis, California from Southern California in the late 2000's.  She lived in Davis and surrounding areas for approximately ten years before relocating to the Pacific Northwest. Kerry had done numerous privately commissioned works and interior murals while living in Southern California, most notably in Beverly Hills and the Mid-Wilshire districts of Los Angeles. Kerry had also been on several faux finishing teams, most notably for the Chin Residence in Palos Verdes.

Kerry moved to Davis, California in 2006 and after completion of a privately commissioned mural for the historical Anderson Bank Building, was later asked to join the original group, which titled itself the Davis Mural Team.  She was also Artist in Residence of the Log Cabin Gallery in 2011 and 2012, and former board member of two art associations in Northern California. She has numerous solo and group exhibitions throughout Northern California, and the Natsoulas Center for the Arts.

Local Murals solely designed by Kerry include Windows (2nd and G Street), Splash (H and 3rd), and the Royal Dance Mural (Palm Court) - since removed by the owner. Kerry also created the Splash of Humanity mural in Concord, California, as well as two corporate type murals for the gyms of a corporate client.  Kerry completed her Farm to Fork mural for the Grocery Outlet owners in 2017, as their gift back to the community. This mural was assisted in it's completion with the help of various students and local artists of Davis.

Collaborative murals include: Tribute to Giuseppe Arcrimboldo - by John Natsoulas (C and 3rd Street, across from Farmer's Market, and Through the Looking Grass - by Myron Stephens, with Kerry and volunteers (4th and I Street, Ace California Natives Yard, "Cycling through Time" Odd Fellows Mural, with John Natsoulas, Myron Stephens, Bill Maul and Kerry. As a member of the Davis Mural Team, she assisted on 8 or the 10 murals. She was the restoration artist for the Columbus Cafe Mural by Terry Buckendorf, in 2013, and was the assistant to Caryl Yasko and the Davis Arboretum Tunnel Mural in conjunction with Community Built Association. Kerry also worked on the projection and painting of the Art Garage in 2016, and was the sole artist/designer for Fork to Farm murals at the local high school, and another one done for the Grocery Outlet.  Kerry Rowland-Avrech, Bill Maul and John Natsoulas received a Certificate of Appreciation from the City of Davis for their work on the Art Garage in 2014. Kerry also received a public works award for the Box Project, on 3rd and F Street utility box. Her works are in numerous homes and City Council members collections. 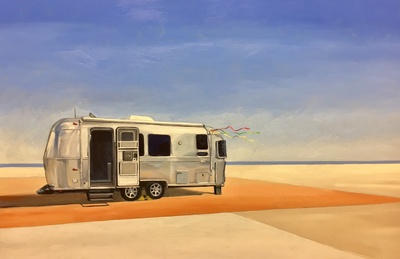 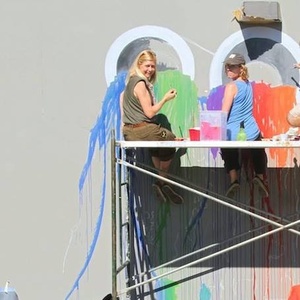 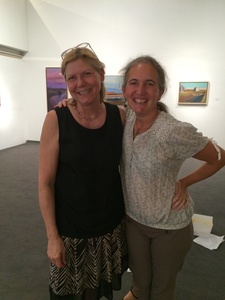 Kerry with a friend and collector in 2016