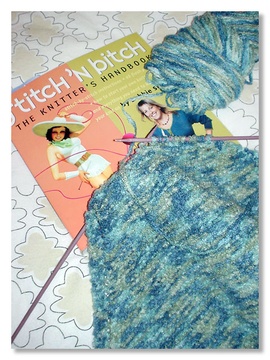 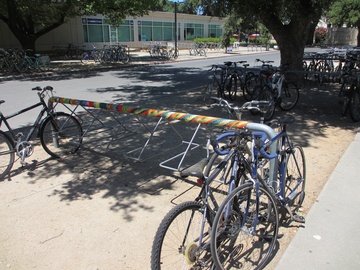 Knitting may not be the cheapest of hobbies, but for those looking to live cheap knitting can provide endless hours of entertainment for less initial monetary investment than something like rock climbing. Even better, while pursuing the hobby, one ends up with a surplus of gifts for their loved ones.

You can no longer buy much yarn in Davis, but knitting needles can still be found in town.

Some places in and around Davis to find knitting supplies and help:

The UC Davis Craft Center offers a beginning (and sometimes continuing as well) knitting and crochet classes, as well as a few classes on quickie knitting and cable techniques. Class schedules and cost can be found here. The cost of the beginning knitting class includes knitting needles and yarn.

The Davis Adult School offers an Monday evening knitting class for $45. The class meets at the new Korematsu Elementary School in Mace Ranch. The teacher provides supplies for in-class instruction, but everyone goes out and selects the yarn and needles they want to use.

Several community knitters have a knitting group that meets every Monday night from 5-7 at the Davis Senior Center. A calendar of locations can be found on their page, Davis Knit Night. They're super friendly, and always welcome more. A second group meets 6-9 pm at the Barista Brew on 5th & G Streets in Davis.

Does anybody know if there are any knitting groups? I know that may sound super dorky, but it may be fun to get a bunch of people together to knit?—ChristyMarsden

2006-01-23 12:00:23   I think there is a group of people who meet at Delta of Venus on Tuesday or Wednesday evenings. I remember seeing a poster that said "Mmmmm... knitting and beer." I'll try and remember to check on this later... —ArlenAbraham

2007-01-05 13:09:49   The Knitter's Playground and In Sheep's Clothing stores both have free "come & knit" sessions. Playground has a knit & movie night., and hosts meetings of local knitting groups. Check the store pages for calandars. The Yolo Knitting Guild meets 2 Thursdays a month Noon to 2pm at the Lutheran Church hall at 8th & B Streets ($1 donation) - notices are in the Food CO-OP newletter. Bring lunch; lots of help available; trade extra yarn, patterns. —ValerieVann

2009-12-02 17:24:00   Today I stumbled upon Knittin' Pretty Yarn Shop in Woodland while I was waiting for City Smog to open after lunch. The owner, Annabelle Reynolds, is looking to sell her business sometime by August 2010 so that she can retire. Since Knitter's Playground and In Sheep's Clothing recently closed, it would be a shame for another specialty yarn shop to close so soon. Is there anyone out there interested in owning a yarn store? In the mean time, she has stocked an excellent selection of gorgeous natural fiber yarns (alpaca, wool, merino, sugar cane viscose, bamboo, silks, etc) which I haven't seen at JoAnn or Walmart. I definitely recommend Knittin' Pretty for that special yarn, although it is less expensive to go to Walmart for the cheap acrylics. —StephanieStudebaker

2009-12-18 17:14:15   Just as a note for any area knitters who might be GLBT: I recently decided to learn to knit. I got a bunch of knitting stuff for the holidays from my partner and my friends, but I still need some things, including needles. I drove up to Woodland on my lunch break, intending to go to Knittin' Pretty. Unfortunately, the store van parked outside had a number of bumper stickers, including a "Yes on 8" one. I didn't think I'd feel comfortable shopping there, so I kept driving. —nmwallace