L.E.A.D. is an acronym for Leadership, Empowerment, Activism and Diversity. Founded in Winter 2016 by former ASUCD Senators Brendan Chang and Mikeala Tenner, it was a slate that was different than longer running the L.E.A.D. slate. This slate ran some controversial candidates and has proven that a slate should not run individuals from two sides of an issue. 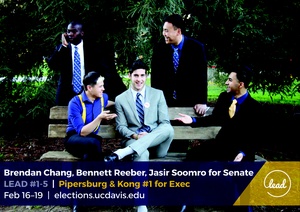 The slate was terminated after this election due to not one candidate getting elected and the actions of several of the candidates.