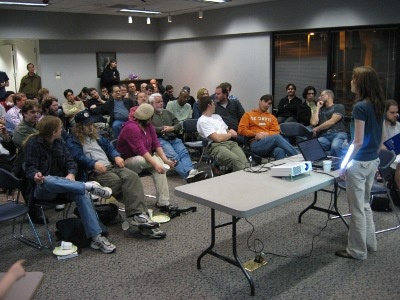 LUGOD stands for Linux Users' Group of Davis. From their website, they are "a 501(c)(7) non-profit computer club serving Davis, California and the Sacramento area. We are a collection of over 400 people dedicated to GNU/Linux TM (a powerful, free, Unix-like operating system), Free Software, Open Source, and other related topics."

LUGOD has many active members and meeting attendance anywhere in the 10 to 60 range, depending on the topic. Many travel from outside Davis to attend, and a far smaller percentage of members are students than you might expect. Not surprisingly, it includes a fair swath of Davis' sysadmin population. They work to promote Linux and Free/Open-Source Software among the town's population, including (but not limited to) the student population. They maintain active mailing lists and an active IRC channel (#lugod) on FreeNode.net.

LUGOD is still alive and kicking! Join us in January 2019 to celebrate our 20th anniversary promoting Linux and Free/Open-Source software to Davis and the Sacramento area. Stay tuned to the LUGOD website or mailing lists for more information about when and where the event will be held.

Activities of note to residents

LUGOD's general meetings are held on first Tuesday and third Monday of the each month as of 2018.

Third-Monday events are general meetings with guest speakers and may be held at the Davis public library or at Explorit Science Center. Meetings typically include a technical or non-technical presentation, workshop, demonstration, or group discussion.

First-Tuesday meetings are informal social gatherings, usually held at Crepeville. (Be sure to check the website before you come, as meetings may occasionally be held elsewhere.) There is usually a small digital sign, club business cards, and/or interesting computer hardware on the table to help you identify the group.These meetings are a relaxed affair where people come and go as they please to socialize and meet people, ask for technical help, and discuss a wide range of topics of interest.

LUGOD sometimes has a tent set up a the Davis Farmer's Market distributing flyers and information about the club, Linux, Free/Open-Source Software, digital rights, computer privacy, internet security issues, and other related topics. Installation CDs/DVDs, stickers, and other freebies are often available, as well.

LUGOD occasionally hosts Linux installfest workshops (http://www.lugod.org/if), at which people can get help from volunteers installing Linux or using Free/Open-Source software. If you are interested in volunteering, email [email protected] to learn how you can help. More information is available at http://www.lugod.org/if/help.(Note: Installfest days sometimes change, depending on volunteer/coordinator availability. Their website always has the most current information.)

They occasionally have hands-on demos, so that people who haven't tried Linux yet can take it for a test drive. Freebies and informative handouts are often given out at these events.

Conferences and Other Events

LUGOD has participated in a number of events, including the Whole Earth Festival and the California 4-H conference at UC Davis, LinuxWorld Expo in San Francisco, the Government Technology Conference in Sacramento, and more. In April 2008, LUGOD participated in the Yolo County Child Development Conference.

They helped construct public internet terminals at Newsbeat, the Davis Food Co-op (which were maintained by the Davis Community Network and Omsoft), and Chamonix. All have since been removed from operation.

LUGOD was founded in January, 1999. A post to the ucd.life Usenet newsgroup, made one month earlier by co-founder Pete Salzman, prompted the formation. The club's website contains meeting minutes, copies of presentations and photos from many meetings. Mailing lists are publicly archived as well.

In the past, LUGOD worked with the Computer Science Club at UC Davis to host installfests, but in recent years have run them alone. A number of groups were started by people involved with LUGOD, such as Davis Plone Users' Group and the CVBIG, the Central Valley Bioinformatics Interest Group. LUGOD has also been involved with the other local Linux user groups: SacLUG in Sacramento and RoseLUG in Roseville.

On January 19, 2009, the LUGOD 10th anniversary meeting ended with the police arriving as a member of LUGOD triggered the alarm after being locked in the library as the meeting was disbanding.

Join us on Monday, January 20th, 2014 at 7pm at the Veterans Memorial Center (Club Room), as we celebrate our 15th birthday with food, cake, give-away prizes, and a presentation on GlusterFS (an open source, distributed file system capable of scaling to several petabytes (actually, 72 brontobytes!) and handling thousands of clients.).

What a night! LUGOD turned 10 at our January 19, 2009 meeting! Many got free pizza, snacks, birthday cake, give-aways and raffle prizes. We enjoyed a presentation by Allison Randal, chief architect of Parrot. 7pm at the Davis Public Library. (Here's a Flyer (PDF))

Opinions vary, but many members are supporters of anything that's Free and Open Source, in fact quite a few also run various BSD machines. —AlexMandel

It is now official. Netcraft has confirmed: *BSD is dying

One more crippling bombshell hit the already beleaguered *BSD community when IDC confirmed that *BSD market share has dropped yet again, now down to less than a fraction of 1 percent of all servers. Coming on the heels of a recent Netcraft survey which plainly states that *BSD has lost more market share, this news serves to reinforce what we've known all along. *BSD is collapsing in complete disarray, as fittingly exemplified by failing dead last [samag.com] in the recent Sys Admin comprehensive networking test.

You don't need to be the Amazing Kreskin [amazingkreskin.com] to predict *BSD's future. The hand writing is on the wall: *BSD faces a bleak future. In fact there won't be any future at all for *BSD because *BSD is dying. Things are looking very bad for *BSD. As many of us are already aware, *BSD continues to lose market share. Red ink flows like a river of blood.

FreeBSD is the most endangered of them all, having lost 93% of its core developers. The sudden and unpleasant departures of long time FreeBSD developers Jordan Hubbard and Mike Smith only serve to underscore the point more clearly. There can no longer be any doubt: FreeBSD is dying.

Let's keep to the facts and look at the numbers.

Due to the troubles of Walnut Creek, abysmal sales and so on, FreeBSD went out of business and was taken over by BSDI who sell another troubled OS. Now BSDI is also dead, its corpse turned over to yet another charnel house.

All major surveys show that *BSD has steadily declined in market share. *BSD is very sick and its long term survival prospects are very dim. If *BSD is to survive at all it will be among OS dilettante dabblers. *BSD continues to decay. Nothing short of a miracle could save it at this point in time. For all practical purposes, *BSD is dead. —JimStewart