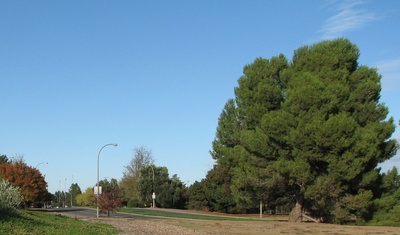 A view looking north along LaRue Road from the corner

La Rue is the road that Anderson Rd. becomes as it intersects Russell Blvd. and heads into campus. It is located on the west end of campus. It is named for Jacob LaRue, one of the people who pushed for the formation of the University Farm, which later became UC Davis. The LaRue family owned and operated Arlington Farm, which covered most of what today is West Davis, west of Highway 113. Their original farm house still exists at 2727 Russell Blvd. The LaRue family is credited for planting all of the black walnut trees which line Russell Blvd, near their home. Ironically, La Rue Road literally means "The Road Road" when translated from French.

It then bends to the left and goes behind Tercero and past the Cole Facility.

It is one of the main routes into campus and is part of the loop.