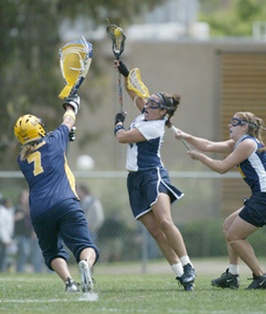 Photo by Elise Kane Lacrosse is played at Davis Senior High School with boys and girls teams, and the Davis Lacrosse Association has teams for several age brackets. Lacrosse is also a club sport
at UC Davis, where there is both a men's and women's club team. The men's team exists as a "virtual varsity" team, as there are only two NCAA men's teams on the entire West Coast. For more information on the men's team, see Men's Lacrosse. For info on the women's team, see Women's Lacrosse.

Lacrosse is a fast-paced team sport played by two teams of ten (men) or twelve (women) players, each of whom uses a netted stick to pass and catch a rubber ball with the aim of scoring points by tossing the ball into the opposing goal. A team is split into three on attack, three on defense, one goalie, and the rest playing midfield. Only midfielders are allowed to cross onto both sides of the field, with attack and defense required to remain on their sides. The major differences between the men's and women's versions are two extra midfielders in the women's game, and much m 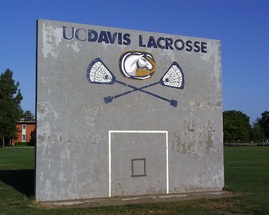 The wall in the field north of PES, built by the men's club team in 2000 to honor club founder Ray Greleore contact in the men's game. Men wear a lot more protective gear as a result.

Variations of the game such as box or indoor lacrosse are evil bastardizations of a beautiful creation and should be avoided at all costs.1

The sport was invented by Native North Americans. Originally played on a kilometer by kilometer sized field with teams of 100 to 1000 men on each side, games lasted continuously during day light hours for multiple days in a row and were often used to settle intertribal disputes. The usual strategy was to injure or kill opposing team members before making a run for the goal. The sport was christened "lacrosse" by French explorers in reference to the similarity between the stick used in the game and a shepherds "crosier".

Lacrosse is also the national sport of Canada, and very likely the coolest damn game in the world.

1. Opinions on evil bastardizations of lacrosse are not necessarily those of the Davis Wiki community as a whole. But seriously, screw indoor lacrosse. - ZacMorris