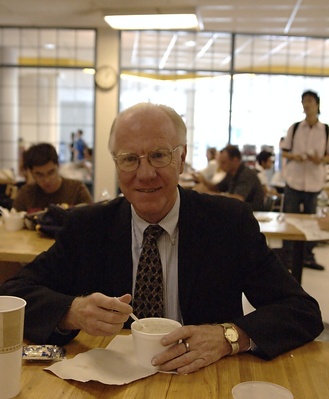 Larry chows down on some chowder at the ASUCD Coffee House

Vanderhoef was born in Minnesota and grew up in Wisconsin. He got his BS and MS degrees in Biology at U of Wisconsin.  He received his Ph.D. in plant biochemistry from Purdue University.

Vanderhoef is a member of Sword and Sandals, but appears reluctant about it (at least in this source) and claims to have only attended a single meeting — the meeting in which they first admitted women. He has received the Anti-Defamation League's Distinguished Community Service Award. He was the proud recipient of the Sacramentan of the Year for 2004. In his twenty years here at Davis he has not heard anything about cow tipping, but is looking into it. Picnic Day 2009 is honoring Chancellor Vanderhoef as a Distinguished Legacy.

Much of this information was found in his official bio.

Was the first Chancellor to award the UC Davis Medal to people.

In early 2006, Vanderhoef faced the threat of a "no confidence" vote by the Academic Senate. Seems like they were a little irked about Vanderhoef's deal in which he gave former vice chancellor Celeste Rose a $205,000 job with no official duties. Rose then dropped her threatened discrimiation lawsuit.

The quad east of the Mondavi Center was named the Larry N. Vanderhoef Quad after he stepped down as Chancellor. He was also awarded the UC Davis medal and as Chancellor-emeritus currently has offices in the new Conference Center.

In January of 2005, The California Aggie ran a feature on Vanderhoef's typical day in this article.

- I am the anonymous student in the article. -JackHaskel

I sat by him once at the Mondavi Center for the University Symphony Orchestra fall performance and he happened to clap at the wrong time, so I guess he doesn't know much about classical music. -RohiniJasavala

If you try to go to his office, on the fifth floor of Mrak Hall, his secretary will promptly kick you out unless you have a damn good excuse. I know this because I tried. Oh, and the fifth floor has some nice furniture in the waiting room, which you'll never get a chance to sit in. - BrentLaabs

I've had lunch with him before and found him to be a stand-up guy. -JesseSingh

He kind of resembles Dick Cheney but without the sideways smirk.

Rumor is that Larry has a 2 million dollar slush fund that he can use at any given time, but it is only a rumor from past ASUCD Senators who knew him very well.

Ever written him an email? I definitely got a real and very well written response to an email I sent him during the whole Celeste Rose scandal. It really impressed me that he is willing to take the time to answer his email. —NathanSchley

Larry is a good guy, when I was 12-14 on my near daily excursions to the MUGA I would go down college parkway and occasionally I would stop and talk with him when I saw him outside. My dad told me I was chatting with the chancellor, and he became that instead of the guy in that big white house square house. We were on a first name basis, he called me Steve and I called him sir —StevenDaubert

2006-11-20 21:47:04   he seems like a pretty stand up guy. i spoke to him after the chancellor's dialogue thingy his assistants held. he even gave me his business card and commented on my suggestion. woo fucking hoo. —EmilyTung

2008-10-01 16:35:01   Chancellor Vanderhoef came into the ARC today while I was working at the front desk. I find it completely hilarious that he forgot his ID card. —sososharp

2009-12-07 10:37:00   I recall reading an article years and years ago in the Aggie about Larry being accused of being part of a money scandal that sent free millions of dollars to UC faculty and/or administration. I don't remember the details and I can't find the article in the Aggie anymore. I could just be crazy but does anyone else remember this. Even if I'm completely wrong in my remembering it would be nice to see that article again. —Thatotherguy