Laura Nevins unsuccessfully ran for ASUCD Senate as an independent (but was formerly under the FUCKED slate) in the Winter 2007 ASUCD Election. She did not win a seat, being eliminated in the sixth round. She is a sophomore art studio student. Her main campaign issue was getting ASUCD support for the many art galleries on campus. Laura received the most last place votes, officially making her the Most Hated Person on Campus.

So, the other day I was sitting around thinking about all of the things that could be improved here at UC Davis, and I decided that the best way to get off of my ass and do something about it was to run for ASUCD Senate. My name is Laura Nevins and I kind of want to be your next senator.

What I would love to do is get all of the art galleries on campus involved with ASUCD so that more students know about them and participate in their shows. As a sophomore Art Studio major, I feel like the only people who are experiencing the amazing art on campus are art or design majors and people directly involved in the art department. I want to make sure that every student in Davis is aware of the unique culture that our campus offers. Simply put, Art is fucking awesome.

The following sentence is to see what expletives the Aggie will print: shit, piss, fuck, cunt, motherfucker, cocksucker, and tits. (List provided by George Carlin.)

And I would like to shout out to Jack Draper who wants to make sure that ASUCD is more responsible environmentally. I mean look at all the fliers that we print for this election. You just ignore it and trees die.

These are a few of my ideas: 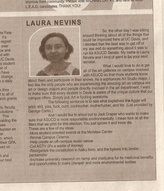 2007-02-04 22:04:23   I'm not so sure how much I like the idea of reorganizing the Constitution and Bylaws (because that is generally what my commission does), But I definitely like your other organizational goals. —MaxMikalonis

2007-02-04 22:14:21   I would love it if you stopped by IAC to discuss transforming the bylaws into iambic pentameter. As of now, many of the elected officials and senate candidates sadly have not even bothered to read the Bylaws, so putting them in a fun, easy to comprehend, and artistic form might be a good move to popularize knowing them. —JosephBleckman

2007-02-27 18:58:23   As a former candidate who had the word "bullshit" edited by the aggie from my statement, I must applaud you for your line of expletives. Also, I hear that you got my title for most last-place rankings, which means that you are well known among the voters... at least they know you enough to know they don't want you in office. *High Five!!!* —RevChad