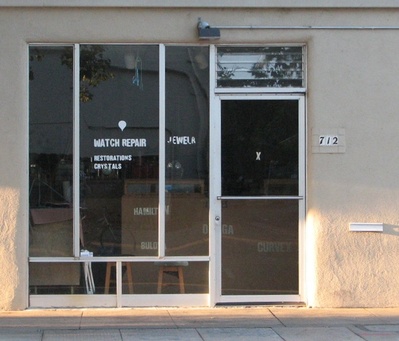 2008-06-20 02:25:17   I managed to break the window on a pocket watch, and took it here to get it replaced. It cost $30, and when I got it back I found he had not bothered to remove the glue from the previous window. This caused the new piece of glass to be uneven and eventually fall out. I was able to scrape the excess glue off myself with a thumbtack and five minutes. In the future, I will be taking my custom to Davis Awards & Watchworks. —JoePomidor

2009-03-18 11:23:18   I took a clock to this place in November, and it stopped running after one month. When I went back to the shop, the owner was extremely rude and unhelpful, refusing to repair the clock properly or refund the $25 I paid him.

2009-10-16 05:38:10   I've had a family member who asked me to never to give this store my business because they treated him like dirt because they he was queer. I broke down today because I wanted a new battery for my watch...Bad idea. The owner basically accused me of being a thief because I had some jewelry in a bag - and then made a comment about gay people, apropos of nothing. Holy crap, I can't believe people like this still exist. Nasty person, nasty business. If you need a watch repaired, maybe take it to the jewelry store across from the SPCA. I've never been there, but since the man told me to go to another place for my jewelry issues, I figure that means the one he didn't recommend is better. —adverselypossessed

2010-04-04 20:36:42   I came here last year in the hopes that he could simply open the face of my watch to put the crystal back in place. He couldn't even open it and wasn't helpful during the whole process. He just uncarefully fiddled around with my watch. On top of that, the place has some weird hours with the guy mostly hanging out next door at the barber shop time to time.

Oh, and I also went back to LA over spring break to finally get it fixed and the guy there did it in a flash and didnt even charge me a thing. —kiddmit3

2011-03-18 23:53:24   Took two vintage pocket watches in for repair. One needed a new spring and the other a cleaning. Came back a week later and gave the guy the $100 we agreed upon after seeing the watches running, but to my utter despair, 15 minutes after I got home, the watches stopped ticking. I took them both back to him and he said that he'd "look at it", which took another two weeks for him to do. Once I walked into the shop 3 weeks after it all began, he told me that he had put too many hours into trying to get these two watches running and just handed them over to me with a "here you go." Temporarily setting aside the situation, I told him that I'd check it out myself and report back to him. After reaching home, I did the disassembly on these watches myself and found that they were not at all properly reassembled, parts were loose, and even the hands were binding. Steaming, I went back to the shop the next day to retrieve my 100 dollar bill and was met with some serious att-i-tude. After a whiny and angry quarrel over "Sorry, I put too many hours into working on them.", I left the shop, wondering where to take my two now-broken watches and how to find another large sum of money to fix them. Will definitely not go back to him and still dumbfounded at my missing hundred dollar bill stolen by the fraudulent thief of a jeweler who caused this mess in the first place. —Davisite123