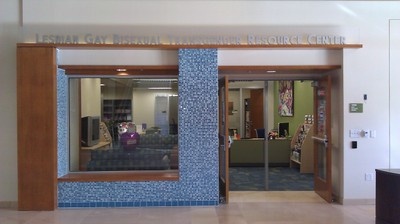 The LGBTQIA Resource Center in the new Student Community Center, 2012

The Lesbian Gay Bisexual Transgender Queer Intersex Asexual Resource Center opened on January 31, 1994. Its presence on the UC Davis campus was the result of a recommendation made by the Chancellor's Committee on Gay, Lesbian & Bisexual Issues in 1992. In the Fall of 1993, a group of students, staff and faculty convened to prepare the Center for its grand opening. The center has been located in several different spaces on campus over the years, starting out in one of the Temporary Buildings near Engineering III, moving to University House Rm 105 circa 1996, and then to the University House Annex in 2000. Its last move was to the Student Community Center in the winter of 2012. It's a very important part of the Rainbow Community, especially among UC Davis students.

The LGBTQIARC offers many resources for Lesbian, Gay, BiSexual, Transgender, Queer, Intersex and ASexual  students and allies. Resources include an extensive library of over 1100 books, a collection of current magazines and newspapers, a growing DVD and VHS video library of both entertaining and educational films, several varieties of organizational and educational pamphlets, and much more! Did we mention that we now have wireless internet access? Yay! Volunteer positions are always available and there are a couple of computers that volunteers can use. The center works closely with the Gender and Sexuality Commission, the WRRC (Women's Center) and the CCC as well as holding meetings for pertinent organizations such as La Familia, APIQ, Woman-Loving, SAME LOVE, BlackOUT and Gender Group.

The LGBTQIARC is responsible for organizing a number of great events throughout the year, most notably, awareness weeks: Pride Week and TransAction Week in the fall and Intersex Awareness Week and "Beyond the Binary" in winter.

The retreat will include workshops and team-building activities, as well as academic resources and an alumni panel. The retreat will provide a unique opportunity for students to network, learn, and share their own knowledge and experiences 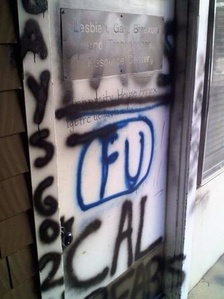 February 26, 2010: The LGBT Resource Center was vandalized with derogatory and hateful words that target the Queer community. The Center asked that the vandalism be kept up for a time "in order to ensure that this hate crime does not go unnoticed by the campus community" and "to take this opportunity to educate the campus about struggles that our community continues to face."

March 1, 2010: Town hall meeting at 5:30 in the ARC ballroom "for the community to come together and express any concerns [and] to collectively decide what actions should take place in the future." 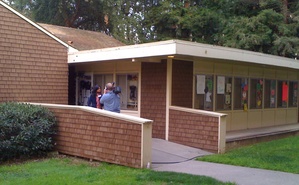 A news crew covering the story 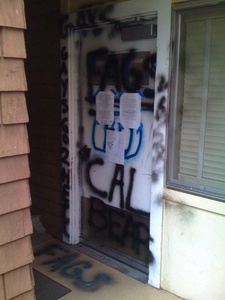 a picture of the door 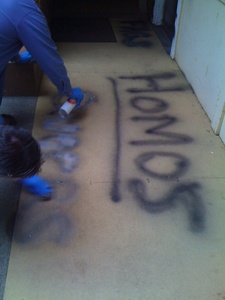 a picture of the walkway being cleaned

i know. it's almost like the university's closet. —BrentLaabs

2009-01-09 20:06:21   I came in to check out the LGBT Center early last quarter and it was the most uncomfortable experience. There was this unwelcoming, judgmental vibe from the other stagnant people in the room. Ugh. Never again. —strawberry

2009-01-10 20:33:57   I'd like to add to the above comments. I went here once, no one went out of their way to acknowledge that someone completely new had walked in. They are not very welcoming. I've heard the same thing from a TON of friends. I have no interest in going back, but I think that's what the people there want because it's clearly their exclusive hangout. Something should be done about this. —OscarSabino

2009-03-04 11:57:49   Sorry about the negative experiences that some of you have faced. As a current volunteer for the LGBTRC I will notify the staff about these issues. I will work on making the atmosphere of the center more warm and inviting.

Just to point out, there are a lot of organization meetings that take place at the LGBTRC. You could have by chance walked in during a committee meeting which does not excuse unfriendly actions, but it may be a factor. —ThUn

2009-07-11 16:23:09   I went in a couple weeks ago and talked to a really nice person (Angela?) that worked there. She was very inviting and helpful so for those of you who had bad experiences, I would recommend giving it another try. —Pringlessong

2010-09-08 11:51:04   I feel very uneasy and uncomfortable when I step in here. Some people say 'hey, how's it going?' and most of the time I don't want to answer and have lame smalltalk. These 'hey, how's it going' seem like BS smalltalk. I'm sure if someones totally new and never have been in this center it would be nice to say that and introduce the center, but for someone who stops by often, I go there for a reason, it may to talk to a specific person, use the computer, look at the library, or whatever, I just wanna go in there and do what I have to do and leave. —anonymon

I volunteered there last quarter, I found the people to be nice. I think one problem is that it is impossible to distinguish the people who work/volunteer there from the people who are just stopping by. Some sort of uniform or even just a simple yarn-necklace nametag thing would be nice. From my experience, everyone I talked to was nice, just remember- this is an established community, so in a way you will be sort of an outsider at first. You may feel a little weird walking in, because it seems like everybody knows everybody else already (and everybody really does know everybody else), but people are accommodating and friendly, though this friendliness maybe be tempered slightly by work we are trying to accomplish (I wasn't very social as I spent most of my time helping put the listserv together). Any stares you get are probably because we don't really know why you're there, or we're waiting to see if anybody else recognizes you. A lot of the volunteers are new, so when somebody walks in it's hard for us (well, I didn't volunteer this quarter so not really 'us' but whatever) to know how to welcome you. Some people just want to become part of the local gay community, some people are part of university staff, others are on a scavenger hunt for some class. We (again with with the inclusiveness :P) deal with an odd mix of official tasks and just being friendly to people who come in, which sometimes leads to official tasks, so sometimes it takes a moment for us to move from one frame of mind to another. Also, coming later in the day helps, there tends to be more people just hanging out around then, rather than earlier in the morning (when I volunteered). If you've never been part of a gay community, haven't been part of the Davis gay community, or have never been to the LGBTRC before, I recommend telling someone that, so that we can realize you're there to meet people and not to just chill and do school work (as people often do). It's not exactly the greatest place to meet people, but it's definitely a place. —AndrewJacobs