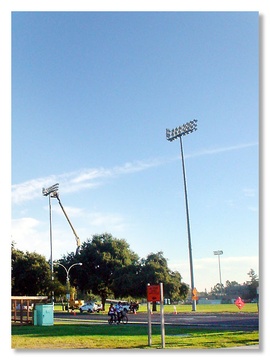 While not bound by city ordinance, campus usually makes a good faith effort to comply.

Davis' Light Ordinance was proposed by then-mayor Julie Partansky and enacted in 1998 — Ordinance 1966 is the reason you can see five feet in front of you as well as the stars night. The purpose is to minimize light pollution and allow people to see the sky. Also, there is currently debate as to whether the new blue spectrum LED street lights are so bright that they will interfere with our circadian bio-rhythms. The City Council may approve warmer spectrum LEDs. Another energy saving solution would be to simply power down the existing street lights and not replace them. A 25% reduction in electricity going to each current street light bulb could save an equivalent amount of energy to what would be saved by going to all the expense of replacing the current bulbs. (Further study is necessitated on the latter point.) Clownshoes. Make things darker to increase accidents & crime why don't we. Also those vapor bulbs still require ballasts & are extremely expensive. It's not about saving money by replacing bulbs, it's about saving money by replacing them once & having the replacement cycle extended by at least a factor of 3. Just do the replacement as they burn out. True savings will be achieved with this long term strategy. Not to mention the spectrum of the vapor lights is actually straining to the eyes, we are just used to it. I for one don't like straining my eyes at night.

Do any of these negatives have anything to do with the actual light ordinance as written, or are they just boogaboos and confusion equating a lack of public and street lighting as being somehow connected to the light ordinance (which is written specifically to not apply in any case where it would affect public space lighting)?

Although these negatives can be questioned, as streetlights are allowed, just not ones without hoods, so there's nothing in the ordinance preventing dark sections of street from being properly lit.

The ordinance is rumored to be a clever way of discouraging outdoor parties. Violation fines are not to exceed $1000 per day.

The Davis Joint Unified School District doesn't make much of an effort. Check out the new parking lot and use a light meter when they are having a football game at night!!

Light pollution is a serious issue both for humans and a wide variety of creatures. I'm quite happy with the ordinance - note that the focus is on preventing upward shining light sources. If you want to have a party, use Tiki torches or a Coleman lantern if you need a really really bright light - both are exempt. Visit the site you reference, Dark Sky, for information on why light pollution should be controlled. — JabberWokky, who grew up with much much more strict light ordinances, since light pollution is a key factor in the looming extinction of several animals.

As indicated by a Simpsons episode, I guess the benefits outweigh the disadvantages — CraigBrozinsky

2005-02-15 12:20:02   Davis is pretty good about light pollution. By driving about 2 miles west of Davis, you can see an absurd ammount of stars. It's nearly as good as being in the Sierras. —ArlenAbraham

2005-02-15 13:26:47   Regarding "The ordinance is rumored (please check) to be a clever way of discouraging outdoor parties": I don't see how it discourages outdoor parties, since any lamp with a top on it (other than open topped shades) are okay by this ordinance and there are loads of exemptions for temporary lights (like holiday or construction lights) and natural lights (like Tiki torches). All in all, it's pretty easy to have an outdoor party that is compliant. —JabberWokky

2006-12-03 22:00:31   I think this also encourages people not to ride their bikes at night without lights, which is illegal in the first place. The few times that I've had to ride my bike back to my house in the dark without a light were pretty scary. Being in east davis, the street lighting is pretty poor, especially on E. 8th street between G and L streets. —AndrewLeonard

2007-04-05 01:24:29   I don't know, I find the ordinance to be hazardous. When I'm riding my bike at night I have a light, but it barely seems to do any good against the dark. Everyone always seems to pile up their tree prunings right in the bike lane in the dark shadows between the far spaced and dim streetlamps, so I'm constantly crashing into them. It's very messy. —DanaMace

Yep, this is one of the issues that Davis Bicycles! is aiming to tackle. —ArlenAbraham

Buy a better light for your bike or ride slower so you are able to see the piles of stuff in time to go around them. If you get a better light(s) the light will shine farther and you can ride faster. If you are running into stuff, the problem is not what is on the street. The problem is you can not see well enough. Why should every person on every street have to accommodate your problem?—casandra

-I'd say because it is a serious safety issue, and possible liability issue for the town. We are talking about serious injuries vs. people being able to count stars. As most avid bike riders know, most bike lights are not primarily designed for the biker to see, but for others to see the biker. Davis is a town that has high volumes of compost in the street, high volumes of bikers, and many many partially lit or completely dark streets. This seems like a recipe for disaster. I'm surprised the city hasn't been sued by someone who has had a bike accident resulting from a dark street, as the city has taken a conscious effort to not light streets and address a safety hazard.

2008-11-02 08:40:59   i agree with the ordinance because it is nice to be able to see the starts at night. however, living downtown on university, i oftentimes feel unsafe when walking around at night. sometimes when driving in davis at night in the rain i almost become lost (and i have a good sense of direction) because i cannot see the street signs in front of me. i think davis needs more streetlights downtown, and perhaps have them turned off at 10 or 11pm. —fakeplastictrees

2010-12-19 02:36:10   I read this article recently about these blue lights that are used in some parking lots, the light they emit allows for more visibility than the more commonly used lights, and they also don't contribute to light pollution. I think that this could be a good alternative for safety issues in large parking areas. However, I don't know how these lights factor in with animal extinction. —jwieland1989