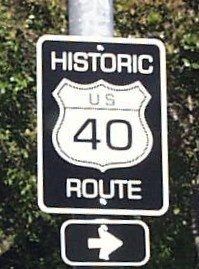 The Lincoln Highway originated when Carl Fisher (who built the Indianapolis Motor Speedway), saw a need for a transcontinental highway. The early supporters of the highway decided to name the new route for Abraham Lincoln, who fifty years earlier had supported the construction of the first transcontinental railroad. Beginning in 1913, the highway, with its termini at Times Square in New York City to Lincoln Park in San Francisco, saw dozens of communities battle over the routing of this first national road. Within the followin 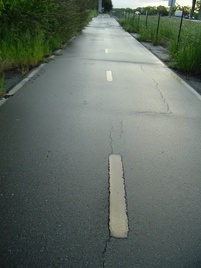 g decade, other highways were designated, and new routes were devised by local, regional, and state supp 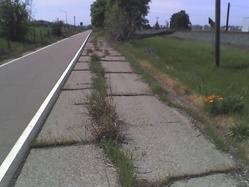 Old Pavement Covered by new path orters vying for federal, state, and tourist dollars. This echoed the earlier battles over railheads and depot choices during the development of the railroads.

The original Lincoln Highway in California was routed through the Central Valley along what is now SR 99, and then westbound to San Francisco through the Altamont Pass, due to the largely impassable Yolo Bypass, and the lack of a crossing at the waterways in the eastern Bay Area. However, after the Yolo Causeway was built and the Carquinez Bridge was built over the Carquinez Strait, a more direct route from Sacramento to San Francisco was possible, and the Lincoln Highway was re-routed in 1928.

The Lincoln Highway realignment  through Davis from Sacramento crossed the Yolo Causeway and then traveled westbound  along what is now County Road 32A, and then continued on a straight path along what is presently the bicycle path south of the Union Pacific Railroad tracks, connecting to today's Olive Drive, and under the Richards Boulevard underpass. The highway then turned left onto First, right on B Street, and then along today's Russell Boulevard, passing the original entrance to UC Davis, to Cactus Corners, and then turning left southward on today's Pedrick Road, towards Dixon.

Amenities, including restaurants, lodgings, and gas stations, lined the Davis portion of the Lincoln Highway. The Sno-White Drive-in (today's Redrum Burger) and Slatter's Court (an auto court, common in the early auto era) were originally built and situated along the highway to take advantage of the tourist trade. There were three gas stations within town along the route. Two of them were at the intersection of B and First, one on the northeast corner and the other directly across at the northwest corner, while the third was on the southwest corner of Fifth and B, where the highway turned west out into the countryside.

Slatter's Court (pronounced "Slater's") on Olive Drive was one of many motor courts that peppered the highway. Back then, one could drive their automobile into the court, rent a cabin (now homes), clean up at the community bathroom (today a rental residence), eat at the community cafeteria (currently a multi-roomed dwelling called "I-House"), and in the morning fuel up at the station (presently a barber shop).

With the advent of other highways such as Highway 50, support for the Lincoln Highway dwindled. Eventually, the road was re-aligned in spots and rechristened Route 40. At this time, the city's portion ceased to function, and a new section was built just outside the city limits. Route 40 was later re-designated I-80. The eastern end of Olive Drive curves slightly and serves as an freeway exit. Beyond that, the original, extant Lincoln Highway is now a bike path extending to the causeway. 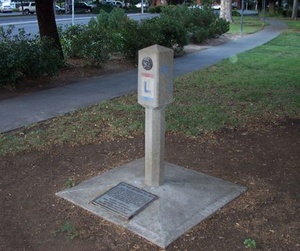 Marker Plaque Reads: Lincoln Highway Marker . One of the markers erected by the California automobile association in the 1920s to designate the California portion of the Lincoln Highway from New York City to San Francisco. The Highway followed US40 from Sacramento through Davis via Olive Dr. First and B St. and Russell Blvd. . Plaque donated by Davis Chamber of Commerce Monument erected by Building Inspection Division

Fact Check: In 1928, the Boy Scouts erected 3,000 concrete monuments along the length, the local one of which is located in Central Park at the corner of B and Russell. — this is the official recorded history, but the plaque appears to contradict this. Possible BSA and the Building Inspection Division together? Somebody could contact the local Boy Scouts and see if they have any records.

Another marker is located at Russell and Arthur in West Davis.

I believe the concrete marker was originally erected by the Boy Scouts, with no involvement from the Building Inspection Division; eventually, many of these markers were taken down across the nation. At some point, two of the markers were either saved or found, and the marker was then re-installed by the Chamber of Commerce and the Building Inspection Division with the accompanying plaque. This side of the street didn't become Central Park until the 1930's. John Lofland, Phyllis Haig, or someone similar is probably more knowledgeable than me on this subject. - CentralDavisite