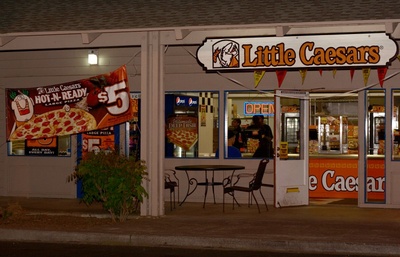 One of the cheapest and fastest pizza restaurants around, the Little Caesars chain is known for their $5.99 "Hot-N-Ready" pizza. Last minute meeting catering and sports gatherings are frequent customers. Their fliers routinely arrive in the junk mail.

A Little Caesars Pizza once existed on West Covell Boulevard but left some time ago. Welcome back!

2009-07-12 12:35:22   Really great location, I work here. The owner is really nice and the company really takes pride in the pizza making process! Try the crazy bread or Italian Cheese Bread if you decide to give it a try, it's sooooo good. —TICKtacTOEtag

2009-07-12 19:08:24   Putting high standards aside, the $5 pizza is a pretty good deal on a day with no time and two mouths to feed. In fact, bonus for the fact that the pizza is ready to eat and cheaper than any super salty "gourmet" frozen pizza. But, again, not exactly going to be a staple in my pizza diet. Just great when you're in a crunch or lazier than you'd care to admit. —RyanMikulovsky

2009-08-17 13:53:11   hot-n-ready's are a steal for the price. it's unfortunate that you have to pay for the packaged sauces but it's understandable since their only source of revenue seems to come from the 5 dollar pizzas. —BenLee

2009-08-22 16:21:22   I suppose, if you were ever so desperate for something edible but was incredibly lazy, and all you had was $5, Little Caesar's is the place to go. However, if you do not meet the above criteria, then please stay far, far away. A $5 pizza that you get for under a minute is exactly how you think it would taste! —blastoff

2009-12-01 20:02:45   It's a nice place to work (I used to work there). I love the pizza and Italian Cheese Bread is my fave! To answer a previous comment and many calls that Little Caesars gets, yes, they do deliver! —MarjaGMorgan

2009-12-14 16:00:29   Unfortunately, Little Caesar's in Davis does NOT deliver. They can't afford it! Perhaps something in the future? But despite popular belief, they do make and roll all their dough on-site (non-frozen), and prepped on-site as well. Their Hot-N-Ready's are sold constantly and new ones are always being thrown in the oven so the pizza never sits in the hot box for more than 10 minutes or so. Ask them about specialty pizza's, they usually cost under ten dollars and are made right away, more toppings than the Hot-n-Ready. It's really not as bad as everyone makes it out to be, its a good deal for 5 bucks. —Jester

2010-01-08 15:24:38   I seriously get the Hot-N-Ready pizza every other week because it's so convenient and cheap! And it's not bad pizza for only 5 dollars. I have had to wait a few times to get the cheese pizza, and it seems like they don't have as many Hot-N-Ready cheeses and they do pepperonis, but my wait time was always under 10 minutes. If you want cheap and easy, definitely go for Little Caesars. —emmaleanne

2011-06-22 00:08:03   Probably the best pizza place in Davis. They don't slather their pizza in oil like other places and its the best deal you could get. On some days I went there and they have specials (like with olives or bellpepper) for the same $5. Owners are nice and friendly too —JohnathonJosephs

2011-11-19 22:59:11   I believe that Little Caesar's very graciously donated quite a few pizzas (I don't know exactly how many—I saw at least half a dozen large boxes) to the peaceful protest of Chancellor Katehi's planned press conference this evening. Several hundred hungry students appreciated it! :) —zombiek

2012-03-05 16:22:47   I really like the prices, and I eat their pizzas more often than I'd like to admit. But I always get a stomachache from eating them. I know it's not food poisoning, but there is apparently some ingredients used here that my body has trouble digesting. I've never have this problem at any other pizza place. —ScottMeehleib

2012-11-11 23:18:51   While it is true that the pizza is pretty good for the $5 price, I had a terrible experience with the cashier here. I ordered some Hot'n'ready cheese pizza. Unfortunately, she mixed up the order and thought I said pepperoni. She did not confirm with me, and I did not notice the mistake until I got home. When I called back asking to make the order right, she told me that they could not help me because I left the store. Eventually she gave me the appropriate order, but not without fighting me every step of the way. Suffice it to say, I will not come back. Next time I need cheap pizza, I will go to Dominoes instead. —NyssaSpector

2013-07-23 17:51:53   We've found the service here to be fine. When they took longer on an order than expected, they gave me some free crazy bread as an apology. We far prefer their rectangular deep-dish pizza over their standard pizzas, but they are a little pricier and you have to wait 15 minutes. Totally worth it. Very good pizza, quite thick. I had them make extra cuts for smaller pieces and brought it to a potluck for kids, and it was perfect. —EvaG

2013-11-08 16:15:15   I called in and told them I wanted 2 deep dish pizzas and asked to have it ready for me to pick it up an hour and a half later than the time I called. They said they would have it ready by then. I came in 5 minutes after the time I asked them to pick it up and my pizzas still weren't ready. I had to wait an extra 20 minutes for my pizza to be done. They should know how long it would take to make the pizzas, plus I called an HOUR AND A HALF before wanting to pick it up, it should have been ready by the time I got there. Other than that, prices on the pizzas are fair and I would only go with the deep dish. The $5 pizzas kinda suck. But you get what you pay for. —JaceWinter

1. According to http://sacramento.craigslist.org/fbh/1235475001.html which was the hiring ad for the location.