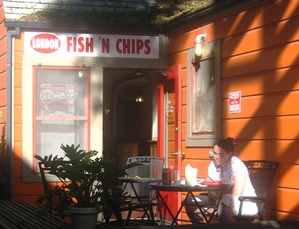 The fries are not American-style thin crispy ones, but rather oil-fried wedges of potato. Mmmm... potato in boiling oil; a nutritional nightmare that is oh so tasty. They also serve up a variety of other savory deep-fried food, all of which goes well with malt vinegar. Other sauces include tartar, ketchup, and a thick red spicy sauce that claims to be cocktail sauce, but lacks the requisite horseradish and is therefore not cocktail sauce.

New to the restaurant in 2009 are rice bowls and bento boxes. Rice bowls can be served with your choice of chicken, beef, or tofu (there are surely other options). The bowls also include steamed carrots, broccoli, and teriyaki sauce drizzled rice. As of July 2009, rice bowls cost exactly $5 when tax is included. Bento boxes also have various options such as fried calamari steaks or prawns. They include rice, slaw with ranch, steamed vegetables, and a fortune cookie. Bento boxes cost $5.99 before tax.

The restaurant has been in operation for many years. Since 2006-02-02, it has been owned by the same person as Davis Noodle City. They added sandwiches to the menu, but kept the same name as the previous owners and retained the focus on crispy fried goodness. 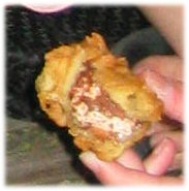 This is what a deep-fried snickers bar looks like (from the end, while being eaten).

For many years, it was run by two Chinese women who seemed to enjoy frying things. It was taken over by a Chinese couple in spring 2005, who immediately introduced chicken strips (battered like fish, but with a fresh chicken taste.) As of this writing, the fish is still delicious, and the portions just as generous. With the exception of these new items, the new owners have implemented a few changes to enhance your experience there. Notably, they now change the oil every day, so you no longer have to worry about lingering fish and deep fry oil odors. They still serve deep-fried twinkies and snickers, but they are not on the menu. The restaurant serves Coca-Cola products and allow free refills.

They tend not to ask whether you want a receipt or not, so for safety's sake, you should probably ask for one even if they're not crowded.

The location became The Dumpling House on 2010-01-25, though oddly the Fictitious Business Name was renewed after this date.

2008-02-25 22:31:41   I stopped in around dinner time. It was sad to see the place empty save two other customers, but the service was prompt, the portion sizes were good (if not a little large) and the fish was deep-fried to perfection. The one-piece is a really good deal and plenty of food! —JessicaRuygt

2008-03-17 01:36:34   Great place for a snack that just hits that greasy crispy craving. $4.30 after tax for one fried fish and fries. Lots of other combination options like getting 1 fish with prawns, clams, or calamari. They have sandwiches, onion rings, and other fried goods. Not bad, recommended. —CoreyPham

2008-03-23 23:54:10   The first time we went there the place was completely empty but the food was good and service was quick. You get large pieces of tender fish that are fried nice and crispy (not soggy at all) along with a large amount of fries. I have also tried the calamari and it wasn’t bad either. If you have a craving for deep fried food then this place is recommended. —NtoWolves

2008-04-13 02:51:02   Wow, this place was fantastic. Service, taste, and portions are great. I especially enjoyed the spicy, tangy sauce condiment with the fish. Fantastic dining experience. I will go again. Next time I'm getting an order of fish&chips, a .99 milk tea, and a side of coleslaw. So delicious!!! —soohoo

"2008-06-13 2:21:00"   I'm vegetarian, so I can't say I've ever actually eaten the food here. The people seem very friendly though. A friend and I once asked the woman at the counter if she would deep fry a gum ball for us and she was happy to oblige, although she did request that if it made a mess and she had to change the oil in the fryer that we would be willing to pay a few dollars compensation. —EMS

2008-07-22 20:12:00   So I finally went here despite my better judgement. Don't get me wrong. This place was pretty good...if you like fried food. I thought I did, or at least I remember liking fried food. But there in lied the problem. I haven't had fried food in so long, my body just did not like it. I ordered the 1-piece fish with a side of slaw and could only finish off half the fish, 2/3 of the fries (which were perfectly done), and half the slaw. The slaw was perfectly crunchy, but was a bit too drippy for my taste (I tend to prefer a smoother "sauce"). All-in-all, it was tasty and such, but a while later, my body was having the "wtf did you just feed me" blues. I get this way with burgers too...I'm not sure why... —SunjeetBaadkar

2008-10-01 16:21:17   My housemate and I decided to give this place a shot the other day, and lets say I'll be returning sometime soon. When I first noticed the prices, I was a bit weary, so I decided to order the 2 piece, assuming the pieces would be a bit on the small side. I was soon corrected after I recieved my food. That deep fried snickers looks interesting, I'll need to give it a shot next time. —JimL

2008-12-04 00:20:56   I went here the other day and the 3 fish tacos with fries were excellent. I really liked the cozy atmosphere inside. Cool art on the walls and folk/indy music playing in the background. Maybe next time I'll try the calimari. —CharlesWinkelmann

2008-12-09 22:36:55   me and my partner just hit it up right before it closed. The service was great, the food was good, the banter was also wonderful! The only thing that detracted from the experience was the smallish portions, but then again I'm a 205 lb fat American, so don't trust me. —StevenDaubert

Dude, I'm fatter than you and I was overwhelmed by how much food I got when I split the 6 piece meal three ways with my roomies. —wl

2009-03-31 12:50:41   I called there to see about food for a conference and as soon as I introduced myself to the person on the phone, the man who picked up screamed "we're not interested in your business!" and hung up. I had never contacted them before about anything. I found them to be rude. I will not patronize them in any way and encourage others to do the same and take your business elsewhere— clearly they do not value having customers enough to be courteous. —natah

I, on the other hand, would assume that they mistook you to be a telemarketer, which justifies such a response. —MattJurach

2009-04-27 21:21:43   I thought it was a little peculiar that a LONDON fish n chips was run by a Chinese family, but I tried it anyways. I got chicken strips and fries, and MAN WAS IT HOTTT! I had to wait almost 10 minutes before I could start eating it, but once cooled, it was pretty good. My friend ordered the "One fish" and was kinda disappointed because it just seemed to be a giant fish stick. She ate it anyways. I kinda want to try their Alfredo or spaghetti, just to see how it is. —BrookeB

2009-07-17 19:21:33   Rice bowls and bento boxes are a pretty good value although I think the rice bowls are best out of the bunch. The staff are amazingly nice. Today they didn't have rice ready when I ordered my chicken rice bowl (just as the opened) so they comped me a little and prepared the rice *right*. I'm very happy that they have added such inexpensive rice bowls to their menu. My only wish is that they have different sauces to choose from ala Pommes Frites. —RyanMikulovsky

2009-07-18 00:02:01   I've eaten here twice now. Fishn'Chips has super friendly owners and huray, clam strips! For some reason though I've felt very sick after eating here both times. It may just be due to the severe amount of grease (I usually have a high tolerance for junkfood) but a lot of people seem to love them so perhaps my stomach just doesn't like something they use here. Too bad, I love me some clam strips. —OliviaY

2009-08-04 00:39:49   Elderly employees working behind the counter were friendly. Ordered the 1 fish combo. I know it's deep fried, but damn the fish was greasy. I didn't feel very well after eating the fish. I've been to other restaurants with deep fried fish so I know it's possible to not have it so greasy. The zucchini is still delicious as ever. Interesting that they sell Japanese food and tacos at this restaurant. —BenLee

2010-01-25 23:11:43   The Dumpling House (formerly London Fish & Chips) still serves fish and chips, but is primarly a great dumpling restaurant. I tried the vegetarian dumplings when they opened Sunday (the 25th). I plan to go back again and again, especially this coming Sunday when they will donate proceeds to Haiti relief. —GarySaylin

2011-08-04 15:10:03   Used to love coming here, food always perfect, service always friendly. Random memory: They had napkins with a cartoon on them, depicting some buy at a fish n' chips place in the UK, asking for the fish to be wrapped in that day's newspaper. Loved eating here, then going to Yesterdays to look at books... that place had the smell of pipe tobacco, and an endless treasure of books to comb through. —OldDavis73