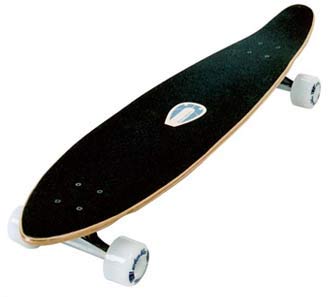 Longboarding is a prominent method of transportation utilized primarily by students in Davis to get from place to place. Longboards are characterized by their longer lengths and widths in comparison to normal skateboards. Longboarding originated back in the 50's as a way to try "sidewalk surfing" in California, with the added benefit of getting higher cruising speeds. Its design allows for smoother, longer strides due to its increased momentum and better balance. Unfortunately, conventional mainstream skateboard tricks are very difficult, which used to deter many riders from longboards. Over the last decade, longboards have started regaining popularity with younger riders due to the development of "longboard dancing," which is a new interpretation of "old school" tricks.

Because Davis is flat and the streets are so long and straight, longboards are an ideal method of getting around the city and campus and offer a viable alternative to biking. Their great speed, ease of use and improved balance/smoothness of ride actually makes them preferable to traditional skateboards for many people. Because of their awesome capacity for cruising, it takes a whole lot less exertion than a normal skateboard. All this of course is at cost of a little bit of manueverability - inexperienced longboarders should avoid crowds. A few kicks and away you go! However, one major drawback for boarding in this town is cracks in the pavement which can easily send a rider down and the board flying. This isn't usually a problem except at night, mostly because of the light ordinance which makes it downright unsafe for riders when you can't see what you're about to roll over...or into.

The only real place to get a quality longboard in Davis is at Ground Zero, which sells longboards (mostly Sector9) ranging from $150 to $300. The internet is typically a better place to shop and price match for longboards, but you won't be able to test ride different types. If you do buy one elsewhere, Ground Zero does apply grip tape for just a few bucks. You can sometimes find great used ones locally on Craigslist.

I have a sector nine that is super springy, I love it —StevenDaubert