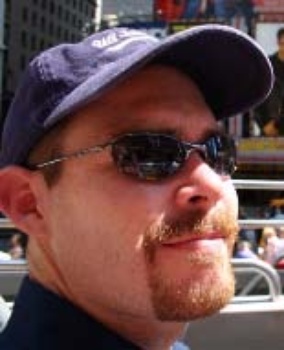 Lucas Taber is from a family that has made its mark on Davis and Yolo County as a whole. Lucas himself has carried on that tradition through his numerous exploits, adventures, escapades, dalliances and legendary feats of derring-do. His former home on Schmeiser Avenue was the launching pad for several events steeped in South Davis Lore, such as:

One of the more notables of these was the Taber Train Miracle. This same home's backyard is the location of the revered Keever shrine, The Gazebo.

Mr. Taber was a contributing reporter and editor for the Davis High School student newspaper, The Hub from 1991-1993.

Along with AdamFlowers, Lucas was a statistician for the Davis High School Varsity Girls Volleyball Team under coach Jennifer Terra for the 1992 season.

Lucas is a graduate of the Davis High School Class of 1993, a charter member of Keever, co-founder of Geniuses @ Work and a former member of the influential Davis band Abdominizer.

He now lives in San Diego, CA with his wife Jobie Taber. They are expecting a baby daughter in March, 2007.