was replaced by International Bistro 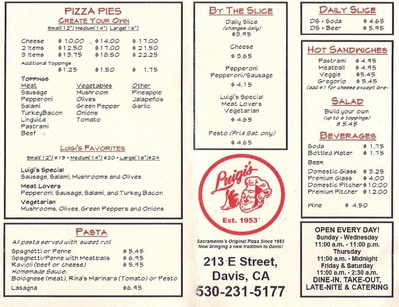 Luigi's closed in June, 2012 after about five months in Davis. The other two Luigi's locations in Sacramento will remain in business.

Luigi's was an Italian and pizza restaurant opening the week of January 16, 2012. A "fungarden" will fill the downstairs area, with an arcade, and space for parties and meetings. In the evenings, there will be live music, working with a sound technician and KDVS radio to find local artists and touring bands.

Owners Greg and Linda Brida own two other Luigi's, one on Stockton Boulevard and another in Midtown Sacramento. Luigi's has been family-owned since 1953. The couple opened the midtown location 5 years ago and took over the original location on Stockton Blvd in Oak Park two years ago after Greg's father Sergio "Frank" Brida retired. The food is made with homemade ingredients, including its pasta sauces, sausage and salad dressings. Along with whole pizzas and slices, the menu features made to order salads, homemade lasagna, pasta, ravioli, meatball sandwiches and pastrami sandwiches. It also includes many vegetarian options.

Luigi's is located on the site of the former Blue Elephant (Discoveries was there before that).

2011-09-06 23:52:12   I ate pizza a few times at Luigi's on Stockton Boulevard years ago. I talked to a couple of guys that worked there. They introduced me to black pepper on my pizza. I wanted to know about Luigi. They said that was just a good Italian name for a pizza place. —BruceHansen

2012-01-22 16:27:27   Stopped by for a free slice today. The pizza tasted good, especially the thin, crispy crust. But the menu is really limited in terms of pizza toppings and sides (no breadsticks? really?) and relatively costly. Why would I want to pay almost five bucks for a slice of veggie? If they want to survive here they are going to have to offer something unique. We'll see if their 'fungarden' (which isn't ready) does that. —MeggoWaffle

2012-01-23 21:26:05   Went there for dinner on Monday, one day after the store opened. Food was ok, definitely not bad, but overpriced for both portions and taste. Customer service was a different story however, and I actually finally got around to creating a wiki profile to comment. Obviously new store = new employees = some inexperience, but for a restaurant that already has two locations, this was an unacceptable second day, and it ranked near one of the worst customer service experiences I've had. The workers ranged from inexperienced to visibly uninterested (within the first week?) to passive-aggressive. This experience would hardly be acceptable from a long-established local favorite, let alone a literally brand-new business that certainly can't rely on killer deals to bring in guests. Here's hoping for their sake that my experience was the exception, rather than the rule.

TL;DR - If you simply love Italian food, try it once. But as far as customer service, caveat emptor... —NathanRd

2012-01-26 16:31:50   I'm an outspoken Woodstocks advocate but I had a good first experience with Luigis. Ordered the daily slice/soda special for $5 even. Slice had pepperoni, jalapeno and pineapple. Slice was as big as Vitos but felt significantly heavier. Filled me up in a way that takes two or three Woodstocks slices to do. Interior still smelled like fresh paint but that won't last obviously. Noticed they were mixing in local sac music in between more mainstream bands. Can't wait for the shows downstairs. Seems like a good addition to downtown. —JakeJames

2012-01-26 19:01:59   I had lunch there on Thursday around 1:30 pm. The pizza slices were large but looked like standard fare. My guess is you could buy a Freschetta Brick Oven Pepperoni Pizza at Safeway and enjoy the same or better quality for less money. I tried the Spaghetti with Meatballs ($6.95)that included a sweet roll. I would give this dish a grade of C+. The meatballs crumbled when I tried to cut them, and the taste overall was just so so. I wouldn't order the Spaghetti again. The staff was friendly.

2012-01-27 11:29:59   Better variety, service and overall quality at pre-existing establishments in Davis. Luigi's is extremely sub-par in comparison to others. Woodstock's Pizza, barely two blocks away, has better prices, better brew selection and less expensive fare than this place and that's just one of several other options for a slice in downtown. In all honesty, this is a waste of space and I doubt it will last. Just another business "passing through Davis". —Wes-P

2012-02-29 22:15:45   UGH. If I could vote for a place in Davis to be revamped by "Restaurant: Impossible," this would be it. My husband had the Lasagna and I had the Penne with meatballs. Both were tasteless, like there was canned generic tomato sauce as the base for everything. My meal was cold when it came. The server was nice about it and offered to make me an entirely new plate. The second plate was lukewarm but STILL much too cold to eat. I was really hoping for a cheap Italian place, but this place is cheap in all the wrong places. I will never eat here again. —lunelectronique

2012-03-21 10:39:49   Had a slice of the pesto pizza and it was pretty good not amazing though. I'm going to try other types before I assign a rating of "meh" to the food. I didn't have issue with the service as some people have. I don't really get the no pitchers downstairs rule though. It just seems like a cash grab since it requires you to pay for individual glasses (or cups rather). Trivia, while very unorganized, is still quite fun but a better system is in needed there. —DanielCordova

As far as the food, I personally like it better than Uncle Vito's but YMMV, as they say. Overall, I think this is a great place to see music...reminds me of the old Mansion Cellars. —sedberg

They have the best shows in town hands down.

The Pizza rocks - It's not the best in town Cenario's Pizza & Village Bakery are better, but Luigi's is open later (when I actually want pizza) and they are downtown (as opposed to wherever Cenarios is) So they win all around overall best downtown Davis pizza on any night of the week.

They have the best comedy shows in town hands down.

They let students study without hassling them whenever there's no show.

If I could change two things. I'd make the stage bigger and I'd change the seating upstairs to booths or maybe longer shared tables. There's too much floor area to seating upstairs. It would be even better if there was a half wall or something to separate the walk upstairs walk through, and thereby creating more seating spaces. —ChuckFrank

I came in with a party of 4 including myself. We all ordered our meals: sandwich, two pasta dishes and I wanted a simple salad. We ordered beer.

I wait to get my salad made while the rest of the party finds a table. The salad is simple you pick 6 toppings out of the lineup. Except every topping I picked resulted in this exchange "Uh we're out, let me check the back" 90 seconds later. "Sorry we don't have any" This happened 4 times in a row. The 4th time I was informed they have never even carried that item on the menu (beets). After finally finding 3 toppings for the salad that WERE in stock I decided not to push it any longer and requested my dressing and went to sit down. Two bites in, I discovered I got the wrong dressing.

Meanwhile my friends who ordered their pasta had been waiting at a table and got up to get the beers they ordered but never received. We weren't sure if the food was brought out to us or called over head. The guy at the cash register tried to charge them a second time for the beer and they had to explain they never got their first order.

Seated for another 20 minutes the pasta dishes are called out...except they gave one away to someone else and so only one of our party got her dish. Our unauthentic apologetic server behind the counter seemed very out of it. 10 minutes more of a wait for the remake of the second pasta dish. When they finally DID come out both diners agreed that the meatballs tasted **rotten** and upon sampling, I had to agree. Meatballs shoved aside they had sauce lacking flavor and bread that had clearly been frozen and then reheated in a microwave. Diner 2 ended up not eating his pasta at all because it was so bad and shared noodles with the first diner since neither could eat the meatballs.

The sandwich passed without incident.

Slow service, seriously screwed up orders and they can't even get you your beer in a timely manner. Why in the world would anyone come back? —OliviaY