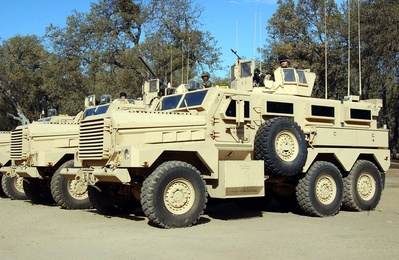 The Davis Police Department was in possession of a MRAP, or Mine-Resistant Ambush Protected vehicle. There was a change.org petition to "get rid of the police department’s armored vehicle."

Discussion about the MRAP in Davis 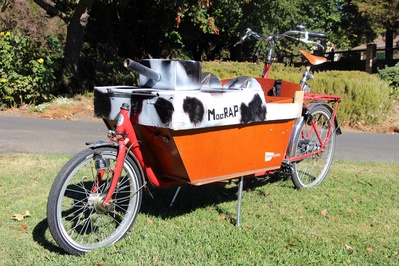 The City Council discussed the MRAP at its Tuesday, August 26, 2014 meeting, giving citizens a chance to weigh in on the presence of the MRAP in Davis. The vast majority of commenters spoke against having the MRAP in Davis, and the Council voted 3-1-1 to get rid of the MRAP. Two days later, San Jose did the same thing; as the San Jose Mercury News put it, "San Jose's move comes right on the heels of similar plans by the city of Davis to jettison its mine-resistant, ambush-protected troop transport, or MRAP."

Davis's poet laureate for 2014-2016, UC Davis Professor Andy Jones, delivered a poem about the MRAP upon assuming his duties.

The Davis Police Department hosted a community dialogue on Thursday, November 13, 2014, at 6:30 pm in the Davis Senior Center Valente Room. The purpose of this first community dialogue was to develop a common understanding of community policing in Davis in light of emerging public safety challenges. New challenges being seen in Davis include increased possession and alteration of dangerous weapons, the increased use of drugs and the relation between drug use and property crime/violence, and gaps in the mental health system. These community dialogues also offer the Davis Police Department the opportunity to develop and practice skills necessary to engage in community dialogue rather than serial monologues. This first dialogue topic focused on: 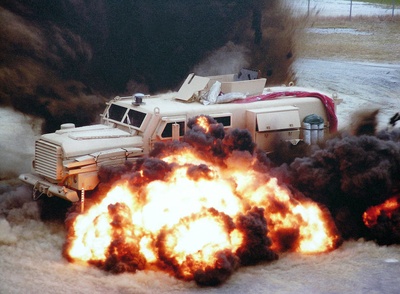 Envisioned use at a typical Farmers Market Saturday. (Actually a MRAP Cougar HE tested in January 2007, with landmines detonating around it) - Photo: United States Department of Defense

In a 3-2 vote, the Davis City Council voted Tuesday night to send a Mine-Resistant Ambush Protected, or MRAP, military vehicle back to the federal government.

The belief is no matter what good use the police might have for this vehicle, it just doesn't fit in Davis.

2014-09-05 13:42:44   I've watched how Andy the poem recited Andy Jones Poet Laureate on MRAP Davis; he did that very well. It was a thought through move to write a * long * poem about it. So it wouldn't be just 4 lines in at best 1 minute, but instead: ... lines in 4.23 minutes. It 'forces' people to think about it longer than that 1 minute. I was wondering: the poem states it costs the City of Davis $1000 (or more) a month to preserve the massive vehicle MRAP. Is this true and: how come? —ConstantiaOomen

2014-10-22 14:07:33   Keep it? IMO if you wish to keep it, it's like saying: we expect to need it. That is not showing a lot of trust in this lovely little community. Maybe we would need it for an extraterrestrial invasion then? Just kidding. But this pepper spray event with John Pike shows violence is not the answer, not in Davis anyway. Because most people in Davis tend/seem to be (very) smart and (very) peace-loving people. —ConstantiaOomen

2014-10-22 14:21:03   I sat for months as an alternate juror on the Topete/Diaz trial and saw first hand what is in our community. To say we have no need for something like this is a little naive. Even City Council recognizes the need and will be discussing possible procurement of a different vehicle and sharing options with other communities. I wish we lived in a world where we can choose to live peaceably, but when someone wants to bring the hurt, we should be prepared and have the equipment necessary to protect ourselves.

The UC Pepper Spray incident was not the City Police. Plus, the MRAP is purely defensive, built with the purpose of protecting the occupants. —DavidGrundler

2014-10-23 11:05:25   I'm not sure what you are asking for. In regards to the trial, the details are well documented. The dash cam video is available on this site (http://www.fugitive.com/2012/09/14/yolo-deputy-sheriff-tony-diaz-shot-and-killed-caught-on-camera-warning-video-is-disturbing/) though many will find it disturbing. Topete, a Davis resident, put 17 rounds into Diaz and his car in about 4 seconds. During that trial, we were shown evidence from many other related crimes and activities throughout Davis and Woodland. Now before someone points out that he was in his cruiser in Dunnigan, and having the MRAP would not have made a difference in this case, that is true. The point is, there are those in our community that possess the skills, desire, and equipment to inflict harm on others. Sometimes the police have to go into situations expecting confrontation with equipment that is not adequate to do the job. Sometimes, even in our community, they have to conduct raids to collect drugs, firearms, etc. Chief Black laid out the evidence and made his case at the first council meeting discussing the MRAP detailing the situations where a tool like the MRAP would be extremely beneficial, and not having anything would be harmful. You don't have to like it. It's fine if you think we should send the MRAP back and pursue something else. But, please, don't for an instant think that we live in a lovely community where nothing bad ever happens. —DavidGrundler

2014-10-23 12:22:05   David, I watched the footage, thank you. That sure is a very tragic event: both killer and cop were chasing death. This must have made quite an impact on you. The cop would never have chased him in a MRAP, he was all alone, in his car, with this dashboard camera as the soul witness.

I was asking for a case scenario when a MRAP would be needed. Would it be something like criminals holding hostages in a Davis bank or something like that? The Pepper spray incident was something that came to mind, maybe not appropriate I don't know. I'm just not sure what event would justify the use of a MRAP in Davis. Would it be a mass UC Davis student protest and students throwing things at cobs? Or a bunch of criminals in a house, refusing to come out, shooting at cops? I hope somebody can enlighten me.

Of course, I have idealized Davis, and of course: I'm aware that bad things happen here too. I always see Davis like this magical city in a snow globe: protected from brutal events like they happen in Sacramento or other cities. Well, I guess you are right. But the sheer sight of that * thing * in Davis would crack my 'snowglobe' I guess. —ConstantiaOomen

2014-10-23 17:31:35   I never insinuated that Diaz would have been in the MRAP. In fact, I stated that it would not have been in use in that situation. This is an example of a case where it would be useful (http://www.news10.net/story/news/local/davis/2014/09/24/davis-trailer-park-narcotics/16179545/). From my understanding, the broken down peacekeeper vehicle that the MRAP replaced (or was supposed to replace) was used roughly eight times per year over the past five years, and roughly twice per year within city limits. I wouldn't expect the MRAP to be used any more than that. I would hate for the city to pay upwards of $300,000 for a vehicle to fill that role with that amount of use when we sent away a free one. The fact that it is not used very often, coupled with a nice paint job to soften it, would go along way to settling people's fears. Question: how many times have you seen the old peacekeeper in Davis? —DavidGrundler

— Hello David. No, I haven't seen it in Davis, but when you seen one in a photo, you have seen them all. A paint job (with hippie Flower Power?) would not be allowed. But I guess, it's all afterthought. Still I wonder: what's wrong with this picture ;-) :

Had they kept the MRAP, you probably would have seen it in Davis as often as you saw the Peacekeeper in Davis. -DG

- Hello D, I don't know what the 'Peacekeeper' is? ConstantiaOomen

Okay, David, I see. No, I don't remember seeing it, but I only live here (in Davis) for 3 years now. Well, after reading you, it makes me curious: the 2 who were in favor and the 3 who were against it, what made them decide? You sound pretty disturbed that this free 'goodie' was voted away (if I may say so) and you almost have me regret it. ConstantiaOomen

The way I see it, Council understands there is a need for the vehicle, but they also need to address the concerns of the community where a majority seem to be against it. I think it comes down to individual choice of each Council member as to what they believe is more important. —DavidGrundler

- That makes sense. Maybe there should have been something like a referendum, or would that be overdoing it? The 5 city council member represent the people, so I assume you are right that this was a replica of the public opinion. ConstantiaOomen

2014-11-05 16:21:20   For everyone who doesn't understand why the police might want/need the MRAP, here is your chance to ask questions and hear answers in a dialogue with the police department. (Info above in the Discussion about the MRAP in Davis section) —DavidGrundler

I see a conspiracy here. Moving it to Woodland seems to be part of a grand scheme. :-) —ConstantiaOomen