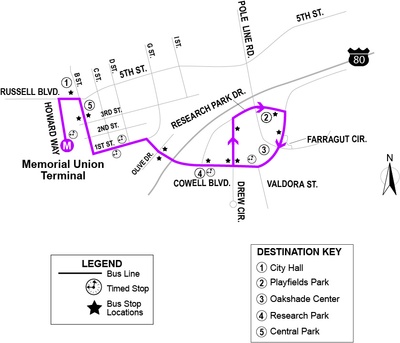 The Unitrans M Bus Line serves a large portion of South Davis, which contains one of the largest student populations in Davis. The line runs down B St. to Richards Blvd to Cowell. From there it makes a left turn on Drew Avenue looping around via Research Park back to Cowell Blvd, then on Richards Blvd, to 1st, and on B St. to the MU Terminal. The M-line runs approximately every fifteen minutes during the day during regular service.

The M-line was created in summer of 2006 to help improve the on-time performance of the former W-MU line, which most people considered to be notoriously late. The issue of lateness arises from the heavy passenger load, but more frequently from Downtown traffic, and congestion at the Richards Underpass, which the new M-line avoids by using 5th Street instead. Unitrans endeavors to be on time, but especially during the midday and afternoon hours, the traffic conditions make this virutally impossible.

Since this bus line covers the same area as the W, in South Davis the easy way to remember is that you just turn the M upside-down to get a W.

Destinations on the M Line

The weekend M Line will run every hour, on the hour from 9:00am to 5:40pm with a 10-minute offset starting after noon. The route follows the regular weekday M Line route.

Also starting August 8th, the line will be extending its run to 6:10 pm.