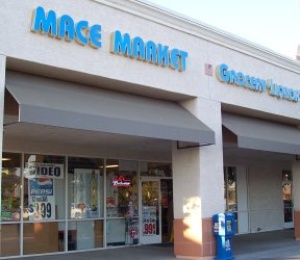 Mace Market was a Convenience store that sold alcohol, groceries and other sundry products. Also, presumably where the police went to buy their Mace and maces. It was owned by the same guys who own Aggie Liquor.

You used to be able to use the Super Saver Card and get 10% off limited items. 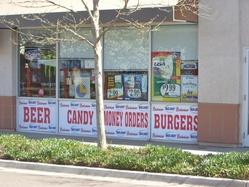 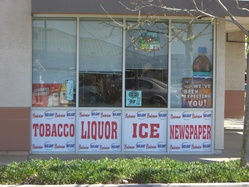 2007-03-16 13:27:24   You can haggle with them on price. I was hanging out once waiting for food, and I showed some interest in a nice bottle of scotch. He kept lowering his price trying to get me to buy. —DavidGrundler

2008-05-03 21:46:13   My wife and I stopped in to get an ice cream tonight after a delicious meal over at Jade Garden. It was about 8:45 PM on a Saturday night and there was no one else shopping in the store. We looked at the ice cream in the front of the store and then walked down four or five wine isles. As we walked back to the front of the store the counter guy came out from the side counter and said almost angrily "Let me know if I can help you find anything." We walked back to the ice cream (a total of less than 5 minutes). We looked at three different ice cream choices and made a selection. My wife pre-apologized by saying "sorry we took so long" and the guy working the counters response was "I have better things to do with my time." Then he slammed the cash register knocking things down on the counter. Asshole. I almost feel bad for the guy for being such an idiot. Most of the time there is another guy that smokes in front of the store and talks on his phone. At least he doesn't tell off the customers. Nice move dude, you lost a customer. —TerenceFleischer

2008-06-23 16:39:34   At least today, and I've suspected this in the past but didn't realize it until later, the price on the shelf differed from the price I was charged. I don't care too much about the 20 cents, but it is illegal. The guy behind the counter said "that's what it rung up as and there is nothing I can do with it." When I said "yeah, but I believe that's fraud" he said he'd have to talk with his manager.

2008-07-28 14:58:33   This is Mace Market, located at 2939 Spafford St., Davis, CA (530-750-0178). This market was conveniently located on my route home from work and provided an easy way to pick up a six pack of brew once or twice per week. I had become a regular customer. Sure the balding guy with a mustache wasn’t the friendliest of guys, but he had never ripped me off, and I always chalked his surliness up to the fact that English was probably his second language. No big deal.

No big deal until the guy pulled a sleazy one on me. My wife and I went to the Mace Market so she could get some Mike’s Hard Pomegranite Lemonade. When we walked into the store, my wife noted that Mike’s Hard Lemonades (all flavors) were on sale for $5.99. We picked up a six pack and went to pay. When he scanned the six-pack, it came up over $8.00. My wife, of course, told him that Mike’s Hard Lemonades were on sale for $5.99. He initially ignored her and placed the six pack in a bag. She repeated that this product was on sale. He brushed her off saying, “The price is what it rings up at; I can’t do anything about it.”

You can’t do anything about it? Really? Now we could have gotten all legal-ese about it and explained that his sign represented a definite offer and our walking to the register with the six-pack represented a definite acceptance for purposes of contract formation, but we chose not to. We wanted the six-pack, so we paid the price he told us we had to pay, notwithstanding the discrepancy with the sale price. However, we made a pact that we would not purchase another item from Mace Market out of principle.

So, moral of story: Mace Market lost a faithful purchaser because it wanted to make an extra $2.00 on a single sale. What a poor business decision on their part.

And apparently, I am not the only person who had this experience. Read the reviews for Mace Market on daviswiki.

I should also add that this is the second negative experience I have had at Mace Market. Being the idiot that I am, I left my ATM card at Mace Market after making one of my famous beer purchasers. The next day I learned that someone had fraudulently used my card to the tune of approximately $200. While I have no proof that anyone employed by Mace Market actually used my card, I have my suspicions now, based on how Mace Market handled this recent experience.

2008-09-08 11:56:38   I had an experience very similar to some posted here. My boyfriend and I stopped in to pick up some Mike’s Hard Lemonade because we noticed it was on sale for $5.99. However, when the cashier rung it up he said our total was $8.70. We didn’t hear the total so we just handed him a $10 bill, but when the change came back we noticed the discrepancy. I pointed out that it was on sale and at first the cashier ignored us. I had to repeat myself twice and he finally just mumbled something about tax and CRV. I said that was still way too much and asked him for a receipt. He refused to print a receipt and said that since it was already rung up there was nothing he could do. I tried to protest, but since it was only a couple bucks I figured it wasn’t worth it. We will never, ever go back there again. —BethanyHelmboldt

1. Sarah remembers to the penny and can recall any given price from a cart full of items. Usually the items are around 10 cents off, sometimes up rather than down, so I personally ascribe most instances to the heavy inventory turnover and constant price changes in grocery stores