Mace Ranch Park used to be an open area full of wild vegetation, animal life, and some concrete paths. The city bulldozed a large part of the wild area (leaving some of the older oak trees, which are now set off in fenced/walled areas), added grass, small trees, a picnic area, and multiple baseball and other sporting fields. There is still a fenced in wildlife area that almost always contains burrowing owls and a lot of wild rabbits (and occasionally sheep and goats in the spring time). There is a multitude of paths in the area, some which ring the wildlife area. The area has become a popular place for walkers, joggers, and lacrosse and baseball players. There is a basketball court, a set of bathrooms, and a set of swings and a playset for the kiddies. The picnic area is roofed, has multiple tables, a BBQ, a drinking fountain, and a water spigot. There is also a council circle — in the middle of the circle, a sign was recently added stating that no fires are allowed here (ironically, it sits in a pile of ash). Around the Mace Ranch Community Park Habitat Area is a a set of community created tiles.

The earthen spiral pictured below is called "Evidence of Life." It is a solar calendar, commissioned by the City of Davis in 2006. From the point of view of the stone at the center, the peripheral stones mark the direction to look for sunrises and sunsets on the first day of each season: spring equinox, summer solstice, fall equinox and winter solstice. The three stones on the east side of the solar calendar mark sunrises, while the three on the west side mark sunsets. (More info can be found here),

There is a memorial to Nicole Carole Albertson near the play area.

Next to the park are Korematsu School and Explorit Science Center. Near the Explorit Center, but still in the park is a gazebo. 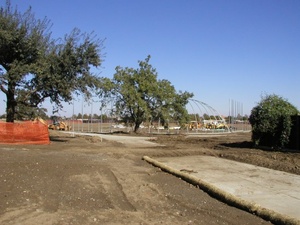 The picture below shows the construction of one of the new backstops (taken in Oct 2004) from the direction of the Loyola underpass.

An earthen spiral near the southern end of the habitat area.

Thank you city of Davis, for turning my unique neighborhood into another suburban eyesore. - TheRadish

The park is essentially now complete. The basketball hoops were put up on July 23, and the fields are nearly ready for a rousing game of soccer. As someone who was against any habitat being left for the owls, i must say that it is rather nice to have the multiple acre wildland area. Though as anyone who has read the EIR understands, the owls are a transient species and will be gone in a few years, even if the entire parcel was left vacant. But we will have some nice rabbits to watch.

Also for the record, the city did not suddently decide to convert open space to park space. This was designated as sports park 20 years ago when Mace Ranch was designed. If we wanted the land to be open space the battle should have occured then - BrianSolecki

2006-05-01 20:44:05   A point of order, please... I also would prefer owls to the structures, but I'm uncomfortable about the lack of neutral point of view in the article. I think it would be better to create a neutral article then follow up with your personal opinions in a comment. —GrumpyoldGeek

2006-05-02 11:14:46   I rewrote the main section last night because it contained little useful information about the features of the park itself. I concur with the person who said the top part of the article should be fact, and opinions should be left to the comments (or perhaps a subsection of the main section if there's enough anger to warrant it). Myself, I have mixed feelings on the park. I'm not particularily happy that they put a park here because I value natural land to a degree, but on the other hand, I use it regularily, like that I can view the burrowing owls, bunnies (before they were hidden by the brush), and occasional snake, and I feel they did a pretty good job overall in making the area attractive. Given that the park is at the intersection of several greenbelts, it gets a lot of use. —AlexPomeranz