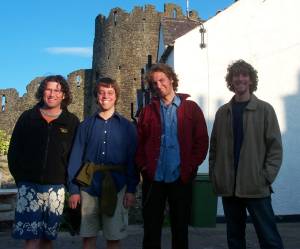 The Mad Cow String Band formed in Spring 2003 to play a Paddy's Day gig at the Delta of Venus. After continuing to play a weekly gig at the Delta for nearly 15 months straight, the band took a chance and went off for a two month european tour during the summer of 2004. The schedule included festivals, pub gigs, and private parties in the U.K., Ireland, Norway, Sweden, Denmark, the Netherlands, and Germany. Since returning to the US the cows have been sharing the Delta of Venus with other deserving bands and currently play every few months at the Delta and many other gigs in the area.

The band's first album, Live at the Delta of Venus, was released on Crossbill Records on January 21, 2006. The CD release show was held at the Palms Playhouse in Winters, CA on that date. They were featured in the 1/19/2006 issue of The California Aggie.

The Mad Cow String Band went on a short tour with The Devil Makes Three in March 2010, playing to enthusiastic crowds in San Francisco, Petaluma, Ashland, Eugene, Portland, and Seattle. Dubbed the "What Could Go Wrong?" tour, the guys are pretty lucky that they each made it back to California in one piece.