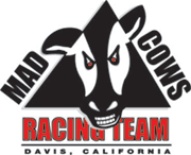 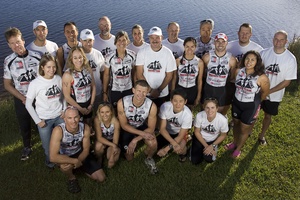 Mad Cows Racing Team is a Davis non-profit triathlon club which was something of an offspring of Dave Scott's triathlon fever. As a moving force and cheerleader for triathletes in Davis, Dave and his father brought a lot of athletes into the sport and even into Davis, as a training ground. Shortly after Verne Scott, Dave's father and coach of the Dave Scott Triathlon Club, joined his son in Colorado in 2000, a small splinter group of local triathletes decided to form loosely as the Mad Cows; this seed group was led by Jennifer Aguilar, Steve Caswell and Damian Horstman. By 2002, Steve and Carrie Larsen returned to Davis and, alongside Diana Hassel and Lydia Delis-Schlosser, brought greater organization and enthusiasm to the group with the Mad Cows Triathlon Team. 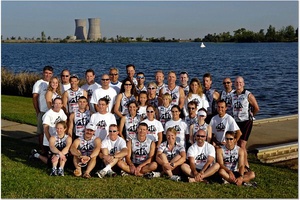 From the Mad Cows site, "Current pro triathletes residing and training in Davis include Jamima Iley, Diana Hassel, and Chad DeMasi, agent and athlete for the highly successful "Team KINeSYS." These individuals are trained by Beth Zinkand's former coach, Dr. Jan Elsbach, who is a "Mad Cow" himself and coaches many of the top athletes in Davis. With the advent of the Mad Cows Triathlon Team, Davis has become a nexus for the athletic and an excellent place to train for athletes of all abilities and ages."

An application for membership is available from the Mad Cows site; dues are $40 annually (UCD students get a discounted rate of $25). The team offers the following benefits to its members:

The Mad Cows Racing Team is a cosponsor of the Wednesday Night Time Trials along with Wheelworks.

UC Davis students who are interested in training and racing triathlons may also want to check out the UC Davis Triathlon Team. The UCD Tri team and Mad Cows have an excellent relationship, often cooperating on workouts, social events, and race organization. Several UCD students are members of both UCDTri and the MadCows.

See Bicycling Activities and Clubs for links to other bike-related clubs and teams.