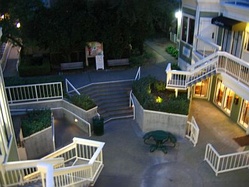 View looking down into the courtyard

Mansion Square is the commercial complex at the corner of 2nd and E St., next to the Varsity Theatre on Second & across E from Sophia's. It is behind the Dresbach-Hunt-Boyer House and shares some of the same architectural motifs.

It has several retail slots, and an inner courtyard of various spaces located at different vertical levels.

The courtyard can be entered via E Street on the West, 2nd St. on the North, and the alley between the Regal Cinemas Davis Holiday 6 and Mansion Square center on the South. The walkways on the West and North sides go to the second level, whereas the South side stairways continue on to the third story. There's an elevator to the back.

On February 14th, 2008 a giant Foothill/Gray Pine gradually began to tilt, eventually coming to rest on the Kaplan Educational Center building in Mansion Square forcing the closure of the 100-200 block of E Street. The tree was removed but Mansion Square businesses were closed in the interim. The tree was one of the oldest trees in Davis and was one of the city's Landmark Trees. 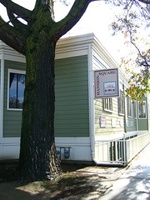 The E Street side, showing the Foothill Pine that fell onto the building. 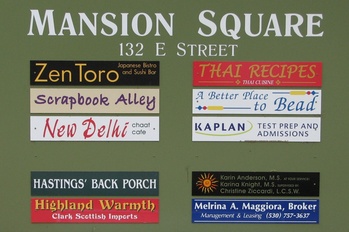