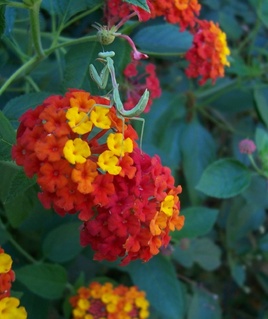 A mantis hanging out on a Lantana

Mantids (Mantodea) comprise an entire taxonomic order, which encompasses all those various insects commonly referred to as "Praying Mantis." There is within Mantodea, the genus Mantis, within which the true Praying Mantis (Mantis religiosa) belongs — only some praying mantids belong to the genus Mantis. Worldwide there are some 1500 species of mantids.

In the United States, the California mantid (Stagmomantis californica) predominates west of the continental divide, while the Carolina mantid (Stagomantis carolina) rules the east — both are green and a bit smaller than the European mantid. The European mantid (Mantis religiosa) is so common in parts of the northeastern and north central United States that most people don't realize it is an introduced species, first arriving in 1899. The larger Chinese mantid (Tenodera aridifolia sinensis) is also found in the eastern United States and in California, and is the mantid most commonly sold through nurseries.

Mantids are beautiful and deadly efficient predators, feeding on many kinds of insects including beneficials and other mantids. Long, slender middle and hind legs are used for walking, standing, and leaping while the elongated forelegs are adapted for grasping and holding prey. At rest, the forelegs are folded together under the head in a humble posture resembling prayer, yet are ironically equipped with rows of long sharp spikes used to hold small prey

these spines fit into a groove on the lower parts of the leg when not in use. Mantids can see movement very well and are the only insect capable of rotating its head 180 degrees. Camouflage coloring allows mantids to blend in with the background as they sit motionless on twigs and stems waiting to ambush prey. They often wait at flowers where they capture nectar- and pollen-feeding insects. Typically, the mantis waits for its prey to come within range before quickly striking out, but on occasion the mantis will slowly pursue its prey with determination — as it moves, the mantid often sways back and forth, perhaps to mimic the swaying foliage it resembles. Mantids almost always eat their impaled prey live, starting at the "neck," and their strong mouthparts can tear apart hard exoskeleton of prey including flies, bees, wasps, butterflies and caterpillars.

Mantids found in North America are typically winged and green, brown, or yellow with a long slender body, large compound eyes and triangular head. Adults range in size from 15-150mm depending on genus/species. Adult males are smaller and more slender than females; also, males may have significantly longer wings and be more likely to fly — females are incapable of flying once they begin to swell with eggs. During mating the female will sometimes eat the male, and the male may even continue to mate more vigorously after decapitation! However, this behavior is infrequent and usually occurs only if the female is starved (and usually only in stressful lab conditions). Remember to feed your date!

Female mantids lay eggs in large frothy egg masses attached to solid surfaces such as rocks, stems, and man-made structures. In spring, when the weather warms, wingless, but otherwise fully formed nymphs emerge to feed on gnats and other insects, sometimes cannibalizing other mantids emerging from the same egg mass. As they grow, the mantids capture increasingly larger prey including grasshoppers, large flies, and bees. Following several molts, development is complete by late-summer and by September or October, most of them die.

For the home gardeners, mantids are most often seen as a beneficial predator and egg cases can be purchased for placement in the garden during the winter. Since they indiscriminately consume pests, other beneficials and other mantids however, their overall value is relatively small compared with ladybugs and green lacewings. 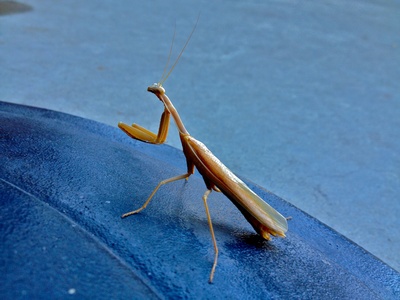