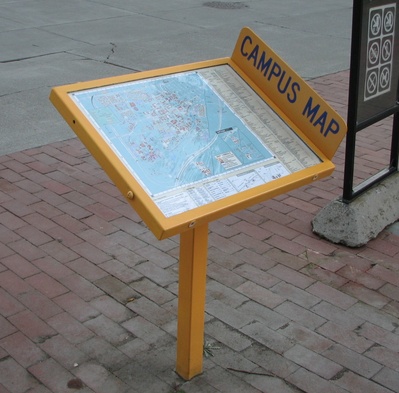 A Campus Map to the south of the Memorial Union patio

To get a sense of local Geography, you can look at lots of maps of Davis, or of broader areas, online. Maps can help you in navigating Davis.

Also check out the DavisWiki map.  You can even edit it!

Check out these sources for more maps: 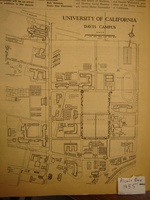 A map of Campus, to help you get around. If you got this map off Davis Wiki in 1955, that is. from The California Aggie 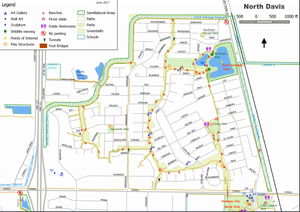 Marc Hoshovsky's Walking and Public Art Guide to Davis is a downloadable, printable guide to art and natural areas around town.If you want a printed map of the area, Newsbeat and The Avid Reader sell lots of different kinds. Maps for the entire town and surrounding area can also be bought at most drugstores, grocery stores and gas stations. The City of Davis also stores additional maps on their Mapping and Geographic Information Systems page. The Yolo County Visitors Bureau also gives out moderately useful maps for free. You may also find maps in the Shields Library Map Room, located in the basement of the library. They have a complete set of California topographic maps to look at and photocopy. You don't even have to put them away once you are done looking at them!

2006-09-08 16:11:48   Can anyone figure out a date for the new GoogleMap satellite image? I can see that the new parking structure isn't completed yet, and the new TAPS building isn't started yet. Jagged Tree is still there. —MattJurach

2006-10-05 21:15:48   Hard copies of the city bike map are available at the visitor info booth at the north parking structure. They are not available at: MU Info Desk, Bike Barn, or TAPS even though they all say the other one has them. I believe the chamber of commerce has them as well, if you can find that place. —JonathanLawton