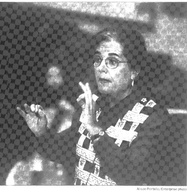 Margaret Neu taught music in the Davis Joint Unified School District from 1967 to her retirement in 1999. She was the first woman band director of Davis High School from 1973 to 1979. She also taught elementary and junior high band and orchestra classes during her career. Among the many students she taught was Mark Inouye and Eric Hoeprich. she received her bachelors in music from the University of the Pacific and a performance degree from the Mozarteum University of Salzburg. From the California Music Educators Association, Neu received the Music Excellence in Education in 1990, and the Music Educator of the Year award in 1991. She also received the Harmony in Our Lives Award in 1992.