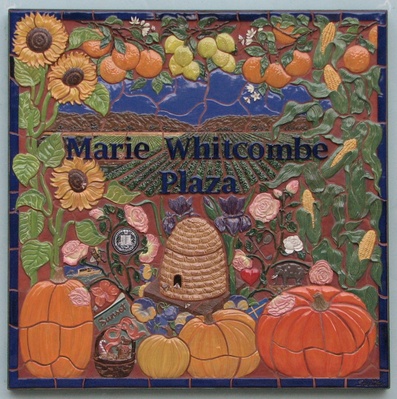 Located on the structure east of Third and B

In 2006, Randii McNear and Ann Evans of the Davis Farmers Market approached the family of Marie Louise (Olsson) Whitcombe (9 December 1908-5 August 2005), on behalf of the City, with a proposal to name the recently completed plaza in honor of their mother. Marie came to the University Farm in Davis in 1934 and developed a connection to farmer’s markets in Northern California in the 1940’s. She and her husband Harry J Whitcombe (21 October 1915-11 October 1987) owned a bee business and their bees were used in the pollination of crops to improve yields throughout Yolo County. They sold their honey at regional farmer’s markets. Marie also helped sell pumpkins and sweet corn grown at North Davis Farm with her children at the Davis Farmers Market in the 1980’s.