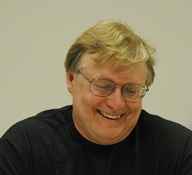 Mark sharing a laugh during an ASUCD Budget hearing (2005).

Mark Champagne was the "business manager" of ASUCD for 32 years. What this means was that he is the highest ranking university employee in ASUCD. (official webpage) Mark managed business operations since 1979 for ASUCD, and offered both advice and oversight for student government operations. Mark finally stepped down as Business Manager for real at the end of June, 2011 — he had an earlier attempt at retiring, but decided to stay on at the last minute. And we're grateful for that.

In ASUCD you have students, who are usually "at-will" employees who may technically be fired on a whim (but the day the University fires an ASUCD President "on a whim" is the day they get themselves sued); and you have career employees who are subject to university union contracts, are not students, and as such your elected officials couldn't fire them for any reason. Mark was the department head of both.

As the Department Head of ASUCD, his primary job is to tell the business units what to do.

He is, of course, authorized by UC Policy to do so:

As ASUCD Business Manager, Mark was involved in the ASUCD budgeting process. He helped the Controller prepare the budget, provided advice on budgetary matters, university policy, etc., acted as Unit Director of ASUCD Administration General during budget hearings, and was part of the ASUCD Management Team (President, VP, Controller, and Mark).

Mark was the only individual authorized to approve ASUCD recharges. Additionally, he was the only person on campus who can approve independent contractor agreements without going though the Business Contracts department.

Fortunately, however, in the opinion of this writer at least, Mark's alignment appears to be basically good.

During Mark's tenure as ASUCD Business manager ASUCD experienced incredible growth in the size of its budget and built up good reserves. The ASUCD General Fund Fee remains at $8 in 2011, just as it did when Mark started in 1979. It's in no small part due to his management skills that the fee didn't increase — in fact, the Student Services Office actually generated income through the Community Housing Listing during his tenure.

At the time of his retirement, he endowed a scholarship fund that will make yearly awards to ASUCD hourly employees. His donation was matched by the ASUCD Senate.

He came out of hiding to write an scathing Aggie editorial on the upcoming Shared Service Center tax in March 2012.