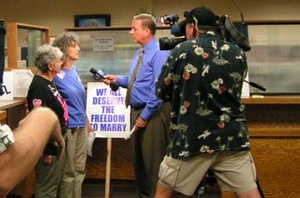 Shelly and Ellen — together 31 years — being interviewed by reporter Tom DuHain at a rally at the registrar's office in Woodland following the invalidation of the marriage licenses issued in San Francisco.

Marriage Equality California is dedicated to fighting the battle for freedom to marry for same sex couples, educating the non-gay world about the reason why the gay community is fighting so hard to achieve the legal right to marry, while leaving it up to churches whether they feel it is within their beliefs to perform same sex marriages or not. MECA points out that marriage is a legal contract which brings with it rights and privileges that are not achieved in any other way. Today same-sex couples are not allowed to fully marry in any state with both state and federal acceptance - no matter how long they have been together, no matter how committed their relationship, and no matter how much their families need the protections, benefits and responsibilities that come with civil marriage.

Davis Residents, Shelly Bailes and Ellen Pontac are chapter heads for Yolo County Marriage Equality California (MECA). They head up the fight in Yolo County, lobbying politicians, distributing information at the Farmers Market and other public gatherings, and usually being the front line media contacts. They joined a caravan of other same sex couples who are affected by the ban on same sex marriage (such as bi-national couples who are unable to be together because neither country will recognize their commitment to each other as a valid reason for allowing the non-citizen partner to remain in the country). The caravan traveled across the United States, stopping to present informational rallies in cities along the route, ending with a rally in Washington, D.C.