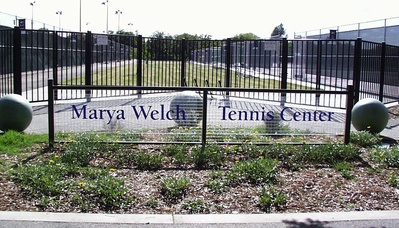 Named for Marya Welch, "the first woman hired in the physical education department at UC Davis" (source), this extension to Campus' current bunch of Tennis Courts was finished sometime in 2004.

Being across the street from the North Entry Parking Structure, the status of this project is sure to make a good first impression on campus visitors. 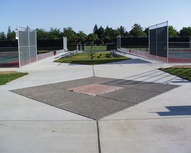 Status Feb 2005. All that remains of the construction is a porta-potty.

Really though, to me it looks like they started on it pretty good and gave up around May or June. I don't know if this is a planned thing or if they hired the same bunch of stooges to construct it that bailed on the Segundo Dining Commons construction after going bankrupt. I'm sure it'l get done during fall quarter though. How hard is it to build a couple tennis courts? They're flat, you know. - TravisGrathwell

It looks like it's almost done now, but as of the end of Fall Quarter 2004 they still don't seem to have lights or grandstands. I wonder whether they're actually planning to install those. — KenBloom