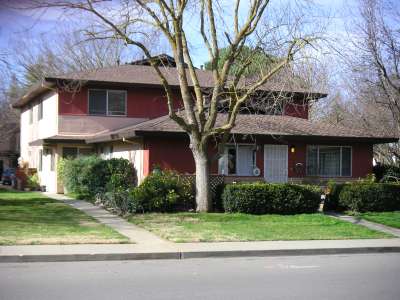 The McKeon Condominiums, also known as the La Buena Vida condominiums, are in a circular layout next to the Wildhorse development in East Davis. There are four units per building, each unit gets one half of a two-car garage, and all four share a coin-operated washer-dryer set. Each unit is separately owned, and the condominium association maintains the building exterior and common areas. At the center of the circular layout is a shared pool and common room that can be reserved by residents. These condos are generally among the least expensive housing in Davis. The majority of the condos are rented out, but there aren't many students in the complex. The most common occupants seem to be families with young children and retirees, and the area is generally quiet and well maintained.

The La Buena Vida complex has special mention in Davis Municipal Code/39 due to the way it meters water usage.

Each building has a ground-floor flat (#1), over-the-garage flat (#4), and two mirror-image two-story units on the side. Most reports indicate the #1 unit is most desirable, and the #4 is least desirable (according to selling price). Note that they are not part of the new Wildhorse construction... they were constructed in the early 1970's, and until a few years ago were surrounded by open fields on three sides. The new construction means the greenbelt, Nugget Fields, and Sandy Motley Park join the Oak Grove Park and nearby Oak Tree Plaza making this a very pleasant living space.

On the down side, the list of Codes, Covenants and Restrictions for this community is rather thick, so don't plan on doing things like changing your "yard", or hanging clotheslines, and only the #4 unit has any significant "porch". All common areas (i.e. everything not inside a unit) are managed by the La Buena Vida Homeowners' Association, which currently employs Association Management Concepts, Inc. for on-site management and fee collection. A 5-person board of directors is elected annually from condo owners.

One rule that does seem to stay bent is the requirement to lock the laundry room in each unit... most are left unlocked to allow you to access more than one washer/dryer at a time to shorten laundry day, in spite of regular warnings from the management that this invites vandalism.

Unitrans L Bus Line stops near the center of the development in Fremont Court. Parking in the driveways is limited, though there is usually parking available on the street.

High-speed Internet is available but due to the distance from the central office, DSL speeds are limited to 384Kbps up/down. Comcast cable TV and Internet are available. Satellite TV is an option but the homeowners' association must approve the installation of a dish. Finding a clear view of the south sky may be a problem as well.

Note: The units were built with aluminum wiring. When replacing electical sockets/switches or doing any other electrical work, you must use the proper CO/AL- or CO/ALR-rated parts unless your unit has already been retrofitted with copper connections.

2005-08-23 16:31:03   While some things require board approval, it's really not difficult to acquire. And although the official DSL speed is 384Kbps, I routinely get higher speeds. —MattCzarnowski

2006-06-13 15:04:10   #4 is the least desirable unit of all 4 units in the complex and it is well known to the neighborhood and sold or rented with significantly lower price. —MoMostafavi

2007-05-01 17:53:16   well i just moved in here and there are quite a bit of younger people who live here (probably because of the price). I also find that the #4 units have the best floorplan but the worst insulation. i dont mind because the 2 & 3 have only 1 bathroom and its upstairs. —GregFurnish

2007-12-01 12:52:50   I live in a #4 unit, and it is quite nice. It helped that the owner was able to install double-paned windows before we moved in. I really like living in this complex; the proximity to Nugget, greenbelt, and empty space make for a convenient and comfortable place to live. However, BJ (the current home owner's assoc. minion) is a major pain. In my opinion HOA should be banned on principle because they invariably lead to petty disagreements over little things. —DylanBeaudette

2008-04-13 09:53:55   Here is a fun experiment: leave your trash cans out for a couple extra days, and they will magically* disappear. (*Technically speaking, they don't really disappear— rather the neighborhood helper BJ whisks them away to the dumpster dungeon over by the pool. You won't get a note or warning, and will have to navigate through her complicated system of message machines and pager if you want them back. ) —DylanBeaudette

2010-09-12 18:44:57   The walls are horribly thin and my unit has single-pane windows. These factors combined means I can make out most conversations going on in other units and outside. If you value privacy or quiet, this is NOT the place for you! —JenniferF