Mike Dugas was a Statistics PhD student at UC Davis from 2000-2005. He earned his PhD in June of 2005. If you've taken STA 13 you might have had him as your instructor! He was active in the Davis College Republicans and actually made a bid for a seat in the House of Representives (in the 5th Congressional District) in 2004. He ran against the late Democratic Congressman Robert Matsui. With 23.4% (45,120 cast to him) of the vote, he lost to Robert Matsui but certainly made a good showing considering that he was a complete newcomer to national politics. Political analysts and State Party officals saw his 2004 run for Congress as a training zone for potential political ventures for the future.

Robert Matsui passed away in the time between the election and the beginning of his term. No word yet on whether Mike Dugas will run again in the special election. All his campaign manager, George Andrews will say is that "at this time, we will respect Robert Matsui and put aside politics and celebrate his life." When asked directly, Mike said "no comment." —KenBloom

Born in 1977 in Miami, Florida, Mike grew up in South Florida during his childhood years. He attended college at the University of Florida, earning his Masters Degree in Statistics there in May of 2000. Dugas attended UC Davis to pursue his doctorate in statistics. He currently works for Capital One in Richmond, VA.

Dugas' involvement in politics began in 2001, immediately after he arrived in California from Florida. He became a vocal conservative political campus activist, after being shocked by what he perceived as a "liberal university establishment" at UC Davis. His innovative political ideas on campus often garnered the attention of local, state and national media ranging from the Sacramento Bee to The Daily Show with Jon Stewart. Through this, he quickly rose to become the 2003-04 State Co-Chairman of the California College Republicans. 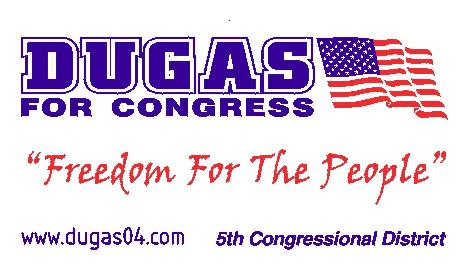 A sticker used during Dugas' bid for Congress in 2004.