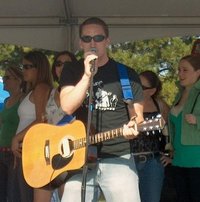 Michael Tucker was the last ASUCD Student Government Advisor, hired in November 2005 and laid off in June 2008. His predecessor was Eric Sanchez, who only held the Advisor position for a few months. He was responsible for assisting the Legislative, Executive, and Judicial branches of ASUCD, cooperating with people such as Mark Champagne. Senator Rob Roy has nicknamed him "The Tuck". He currently works as a law clerk, and attends McGeorge School of Law.

Mike's office had an Open Door Policy so he can advise his heart away. A large, soft brown leather couch occupies the right side of his office. Be warned: If you sit down, you'll sink in. Mike has a penchant for Red Vines, so if you're nice, he just might offer you one. One of Mike's many talents is that he can play the guitar with ease and he can sing whatever song happens to be stuck in your head for you.

The Senate is discussing cutting this position right now, at budget hearings. Come over to the Mee Room if you want to comment on this.