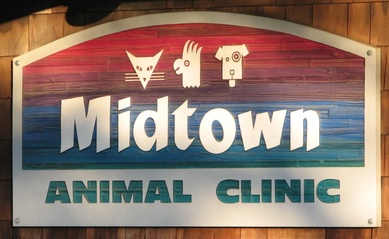 Primary physicians are Kelly Regan, DVM, who purchased the practice in 2017, Cliff Gravem, DVM, (who sold it to her), Áine Coil, DVM, Kim Nguyen, DVM, and Catherine Josling (DVM) (all graduates of UC Davis Veterinary Medicine). They charge $130 for dog neutering [August 2006]. 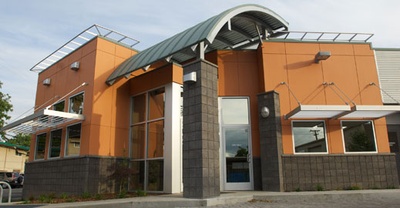 New building as of Aug 2011, sleek and modern

The old building, cute and quaint

See our Veterinary Hospitals page for other vet services within Davis.

2005-02-15 17:34:36   Midtown is a great vet clinic! I've taken two of my own dogs there for years as well as my dad's dog. They're extremely nice, have evening hours when necessary, and are ever so kind and caring when you have to put your dog down or bring him/her in for cremation. I haven't yet heard a bad thing about Midtown. —AlphaDog

2006-1-27 12:29:46   I loved this place. They actually know what they're talking about especially when it comes to pet rats. I trust them w/ my rats more than any other Vet. I was sad to hear that Mike Teglas moved because he was great with my rats. I highly recommend this place! —KrystalVillanueva

2007-01-04 14:47:36   When I came in a while back bringing in my pet rat, Dr. Gravem commented that the Ramones shirt I was wearing at the time was identical to one he himself owned. What else could you ask for in a vet? —LeightonHinkley

2007-05-29 21:46:07   I had a bad experience here when my cat went in to have his teeth cleaned and became very ill about a week later. It was pretty clear that he had picked up an infection during the procedure and they tried to skirt the issue. I also found the reception staff to be very unfriendly. —DavisGirl

2007-07-19 12:13:16   I just got back from an appointment here for my rat, Splinter and I really liked this place. It was great to find a vet who had experience with small mammals and owned rats herself as well. Just for reference, the appointment was $39. —RohiniJasavala

2007-08-22 00:33:59   Dissatisfied with my experience here. Cheapest neuter in town (VMTH excluded), but you get what you pay for. No e-collar, which should be standard IMO, and really sketchy receptionists. Several friends have horror stories about getting dogs neutered here (I found out later), from pulled stitches (from not being given an e-collar), to infections and a cryptorchid that had to be re-done at the VMTH emergency who reported that Midtown had done a funny job the first time around. —AllisonEriksen

My own experience with Dr. Gravem was that he was very gentle with my geriatric kitty, & he really took the time to discuss his medical history and future treatment options. —AprilAries

2007-09-26 23:44:30   I love midtown! Dr. Gravem and Dr. Hartinger are so nice and always have been so sweet to my dogs. We have been taking our 11 year old golden retriever to midtown(who unfortunately just passed away) ever since she was a puppy. Both of my dogs were spayed here and the operations turned out fine. My only problem with Midtown is that they are too popular! Sometimes its hard to get your dog in for an appointment because they are so busy. —kell9

2008-12-28 14:37:01   I was very disappointed during my last visit. My pets have been seen for years, but this last Xmas I asked if I could pay with a post dated check and was belittled, "we have bills to pay too." Very disappointing, not the way to treat a long term customer. Increased their charges and did not inform me either. They just put in an expensive radiology digital PACS, so they have to pay for it somehow. Although the care has been good, I'll never go back and I suggest you consider some of the other quality pet clinics in the area. —AndreaPlon

2009-05-16 15:59:29   Midtown is a great clinic with an AMAZING staff. We have been clients for many years. They have taken care of all our pets with great care and love. Most recently Mahina, our 17 year old border collie mix. Sadly we decided she had lost her spirit and we had to say so long. It broke our hearts and we miss her every day but the treatment and compasion from doctors and staff was incredible.Just a foot note Mahina was a slightly high maintenance dog, but whenever we got in the truck and she saw we were going to see the Dr. she would jump up and down. This was one of her favorite places because of the staff and doctors. I could tell many Mahina and Midtown stories, I'm hoping they will share them and love your pets as they have ours. And to all of you at Midtown THANK YOU, THANK YOU!!! —agerould

2009-08-29 08:14:13   Sadly, the first experience I had with Midtown was to put my beloved 12 year old Himalayan cat to sleep. He had developed a tumor on his chin that finally grew into his lungs and affected his breathing. I had felt belittled at the Animal Wellness Center because I had chosen not to put my cat thru surgery and radiation that may not have helped him and could have left him without a jaw. The doctor at Animal Wellness Center made me feel as though I was irresponsible and cruel for not giving my cat the surgery, but with the risks and the fact that I'm a single mom who can't spend thousands on her cat, I made my own decision. A few months later when my cat's breathing because labored and raspy, I knew he was ready to go. I took him to Midtown because so many of my friends suggested it after I told them about Animal Wellness Center. The staff at Midtown was so kind. They took some of my cats fur so I could keep a memory of him and they stayed with me and held my hand while my kitty died. I don't remember the vet's name, but she was young and blonde and so kind. When I'm ready for a new kitty, I will definitely bring it to Midtown. —ElisaWeller

2010-04-27 12:59:10   Love this place!! The vets and techs that I have dealt with are all so friendly and nice. They are seem to really care for the animals and the people who own them. They were so gentle with my sick dog and gave me great advice about making her better. Highly recommend this place. —JessicaAdams

2010-04-28 17:52:46   Just took my dog here for the first time. Found out he had two ticks and I haven't been successful pulling them out with my parents dogs so I didn't want to try here. they pulled them out for FREE! Prior to talking to them I called Acorn pet hospital and they wanted 27 bucks. Previously have gone to Franklin pet hospital in elk grove because my g/f's parents live there. They are good as well but it's too far of a drive for small stuff. Great reception and vet techs, but I have yet to see a vet. Will be going back for sure. —MMAC

2010-06-07 18:29:31   We've used Midtown for many years with generally good results. Unfortunately, they now require a yearly checkup before renewing heartworm prescriptions. The front office staff first told us they were required by law to do a checkup. After doing some research and asking some pointed question, they had Dr. Gravem contact me and he said that it was the recommended policy of the veterinary board, and it was Midtown's policy. Although I still hold Dr. Garvem in high regard, I feel strongly that there are decisions that customers should be able to make and that this is one of them. —JimStewart

2010-11-18 09:02:12   Every time I try to add a comment about how amazing the staff and doctors at Midtown are I forget all the words. They really are incredible and compassionate and care as much about your animal as you do. Hell, they even seem to care as much about ME as they do my cats. I've always felt really welcome there and I'd bring my cats to see Dr Kim even if I lived in Fresno. Much love for Midtown. —AlexPearson

2011-07-09 13:01:50   I recently switched my dog over to Midtown Animal clinic as it it closer to where I now live. My dog had a growth on the gum (epulus) removed by Dr. Gravem. The only problem is, it had to be removed twice (at close to $400 each time!). The first time, as soon as I got home with my dog, I inspected her gum, and I immediately thought that it didn't look as though enough was removed. However, I am not the vet, so I just went along with it. Less than two months later, the growth was now even larger than before. So, I took her back in and had it removed again (and he didn't charge for the removal, but everything else still added up to close to the previous cost). Fortunatley, this time more was removed, and it has not grown back. I just wish it would have been done right the first time! —ibirdie

2011-12-21 22:48:16   Dr. Coil is lovely and is so good to our dog— truly there are no words to describe how utterly wonderful she is as a vet and a person. I wasn't impressed by Dr. Hartinger, though. I felt judged by her, and wondered why she was even a vet as she didn't seem to care about our dog's health but rather wanted to berate us for certain things. Midtown came highly recommended to us, and I think they are overall quite good. We've seen other vets there who were great but have since moved elsewhere. —ActionFigureBarbie

2012-10-08 17:26:27   I've been bringing my dog here for about six years. I usually see Dr. Dr. Melissa Hartinger. My dog is skittish and once when he had an ear infection he nipped a vet tech at another clinic. Dr. Hartinger always takes extra time to give him treats and win his trust, and takes extra precautions like puts a muzzle on him before she looks in his ears. I really appreciate that she is careful and takes a little extra time with him. She can do things with him that I don't think any other vet could do without sedating him. It makes my life and my dog's life much easier! —LaurenCamp