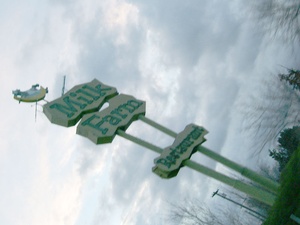 The Milk Farm Restaurant sign can be seen from Interstate 80 in Dixon, when approaching Davis. It is often a welcome sign to see for weary student travelers when they are just about to nod off during the drive back home.

The sign features a snazzy logo with a cartoon cow jumping over a moon. It can be seen on the west side of 80, just north of the Currey Road/First Street exit in Dixon (the same exit for downtown Dixon). Like the picturesque Davis water towers, the Milk Farm Restaurant cow is highly characteristic of our beloved town, and indicates there's only a few more miles to drive to get to Davis.

Karl A. Hess opened the Milk Farm in 1919, and moved it to its present (now abandoned) location in 1939. During the Great Depression people found entertainment at the Milk Farm with all-you-can-drink milk for only 10 cents, often drinking themselves sick while attempting to out-chug each other and secure a place on the board of "honor."

The Milk Farm building itself was demolished several years ago. However, the sign will most likely be saved due to its historical value.

From Capital Public Radio: The property sat abandoned until the late ‘90s when it attracted the attention of engineer and entrepreneur Paul Moller.

“I thought it was a wonderful piece of property,” says Moller, who acquired the Milk Farm in 1998. “You’ve got your own [freeway] exit and your own entrance.”

At the time he was looking for a home for his own business. He develops flying cars. Moller says the city of Dixon was cooperative at first, until there was a change of leadership. The Great Recession didn’t help his development plans.

“We lost it about ten years later after spending millions of dollars and producing environmental reports and studies,” says Moller.

Had the project gone through Moller says the Milk Farm would be the site of his skycar research facility, complete with a lake to fly the vehicles over. He says there were also plans for the Salvation Army to build a base of operations with retail spaces along the freeway.

“I was going to put in a museum. I was going to put a virtual reality center,” says Moller. “It was very heartbreaking really - not just from a monetary point of view, but from a personally satisfying project.”

When Moller defaulted on his loans the property went to the group who financed the private loan, a group now called the Milk Farm Partners. Josh Fischer is Managing Director of the financial company overseeing the partnership. He says they’ve been looking for someone to develop the land but a lot of work on infrastructure would need to take place before anything could be built.

“Ultimately the idea is this property needs to be developed into its highest and best use - that’s the subjective question,” says Fischer. “Developers aren’t taking that level of risk to develop large new projects out-of-the-ground.”

Someday the smiling cow might once again mark a bustling business center, but for now, it keeps watch over the freeway, as motorists speed by. 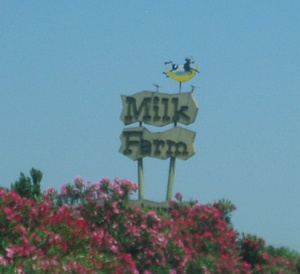 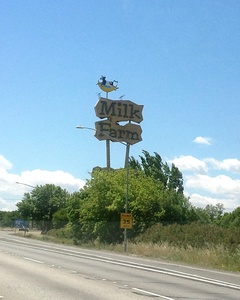 The westbound sign above demonstrates how it rests inside the curve of the offramp from I-80.

2005-03-19 13:17:12   It was indeed a restaurant. When the restaurant was torn down, everyone protested because the sign had been such a landmark, so it was agreed that the sign would stay (though it's looking a big shopworn these days and it wouldn't surprise me if it was eventually taken down). I ate there once. Good place. Kind of an upscale Denny's quality. —BevSykes

2005-03-19 16:01:59   I am fascinated that the restaurant had been there so long! It's a pity they tore it down. I look at the sign everytime I leave/return to Davis and have always wondered the story of the restaurant. Thanks for all the info! —KayRide

2005-10-23 15:41:59   The current owner has plans to build a new restaurant-cum-amusement venue there, but I don't recall the details. It was in either the Sacramento paper or the San Francisco one about six months ago. —WendeFeller

2008-08-01 23:52:43   When I was a kid, (and when the actual restaurant still existed), there was another cow jumping the moon mounted on top of the building itself. It was neon and had a mechanized tail that waved up and down. And at 6 years old, it was absolute magic. So sad its gone. —jefftolentino

2010-05-31 20:40:44   I just found a dinner plate at a flea market with the Cow and Moon logo. Boy oh Boy was I thrilled! Our family had never had a meal there, but the sign was a milestone for us on our way up to Tahoe. When I read that people's lives were so intertwined with the sign, I could understand. I'm happy to have my own little piece in way of the plate. Any recent news about the sign would be appreciated. —Dalia