Mohammad Yahya Rouhani is a UC Davis alumni. During his time at Davis He was a Resident Advisors at Emerson Hall. Yahya Rouhani was active in the performing arts both in the theater department and choral department. As a member of the UC Davis University Chamber singers from 2005 to 2007 he performed in “Carmen” by Bizet, “Lenten Motets” by Poulenc, “Dettingen Te Deum” by Handel, works by Benjamin Britten. He worked under the direction of: Jeffrey Thomas, Martin Neary, Albert McNeal, John K. Bailey, and Zoila Munioz. Yahya performed as "Officer Barrel" in “Urinetown” under the direction of Broadway Granada Artist Mindy Cooper. He was also known for his performance of the "Pineapple Song" as “Herr Shaultz” in Studio 301's production of “Cabaret.”

In 2005 he was a candidate for ASUCD Senate on the Friends Urging Campus Kindness slate in the Winter 2005 ASUCD Election. 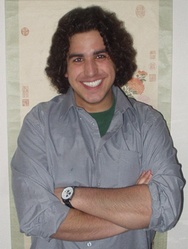 Your real first name is Mohammad? But that means you're a terrorist! - KenjiYamada