Monticello Dam holds back Putah Creek to form Lake Berryessa. It is in the gap between Blue Ridge/Rocky Ridge to the north and Pleasants Ridge to the south leading to Mount Vaca. While most dams have a spillway to the side to manage high waters, Monticello Dam features the less-conventional morning glory spillway, which is basically a concrete funnel surrounded on all sides by water. Putah Creek is recommenced from the waters discharged from the dam.

When the dam was built, the town of Monticello had to be razed. Allegedly, two large bulldozers linked together by a chain were used to flatten the remains. When the lake is low, the foundations of the town are visible.

Engineering estimates state that if the dam was completely vaporized (i.e., no rubble at all remained) it would flood Davis with about 3 meters of water. However the dam would never actually disappear without leaving any rubble behind. It would probably be an event like the St. Francis Dam disaster. —StevenDaubert notes that plenty of rubble remained in the St Francis Dam disaster... The Winters Express newspaper is known as the "Gateway to the Monticello Dam" and uses the dam in their masthead. For news about Lake Berryessa, including current lake level information, check out the Lake Berryessa e-news 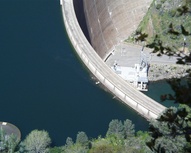 As seen from Top of the World 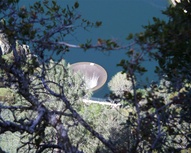 Water spilling into the glory hole

In the shadow of the Rocky Ridge 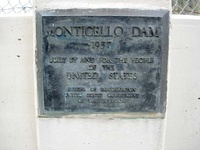 A plaque on the side of the dam reads 'Monticello Dam, 1957, Built by and for the people of the United States, Bureau of Reclamation, United States Department of The Interior' 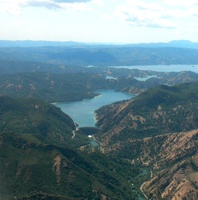 Holding the water back