Vigorous vines that grow as annuals or perennials in Davis, depending on the species. The flowers are spectacular. The plants tend to be invasive.

Ipomoea tricolor is the annual form that grows vigorously to ten feet or more and reseeds all over the garden. ‘Heavenly Blue’ is a popular seed strain of this species. Seeds are toxic and, contrary to popular belief, not pleasantly hallucinogenic. There are a couple of other species that have different colored flowers.

Ipomoea indica, usually sold as I. acuminata, is the Blue dawn sky flower, a perennial vine to twenty feet or more in a single season. It rarely seeds, but sends out ground-level runners that root and rapidly invade shrubs, fences, and borders to become quite a garden thug. The top freezes to the ground or to the main stems in our climate, but resprouts quickly in spring. In coastal areas and Southern California it can be locally very invasive. 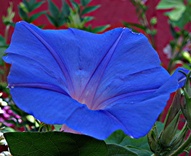