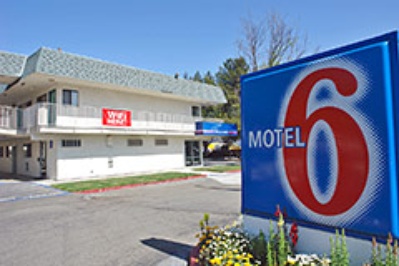 Located on Chiles Road, the Davis Motel 6 is a cheap place with beds. Yay.

On November 10, 2007, there was an attempted murder in Room 222. Julio Guevara-Mejia was angry that his girlfriend, Monica Bentley (a student at Sac State who grew up in Davis), had broken up with him. He enlisted the help of a teenager named Saga who arranged to meet Monica at the motel. When Monica showed up, Guevara-Mejia attacked her, shooting her in the ankle and chest. Before the police arrived on the scene, Guevara-Mejia fled. He is still missing. Monica Bentley is paralyzed as a result of her injuries.

The story was featured on the TV show America's Most Wanted.

For other places to stay in Davis, see Hotels.

2007-09-12 14:03:36   Lol... that's not a picture of the Motel 6 located on Chiles Road.... quite deceiving. I stayed at that motel for a night with my friend who came up to visit me, very very shady place. Lol you don't get anything but a bed with weird emergency style blankets and a pillow. No shampoos, no usual desk with pen and pad, 1 towel, and a bar of soap if you are lucky. When my friend went to the office to ask for more towels and pillows.... they got mad and were rude to him. Oh yea and the night we happen to stay there, the whole first floor was used for convicts to stay the night... haha... yea i felt safe. —WeMo

2012-12-28 00:24:15   As for Motel 6, this is one of the better ones. Its very clean, usually quiet, and the staff is friendly and helpful. Its on the eastern outskirts of town, but is within walking distance to a grocery store and restaureants. The pool area is great. There is no shampoo or other frills because this is an ECONOMY motel. If you want those extras you can go pay alot more down the road. Because this is the cheapest motel in town they get the occasional homeless or down and out folks. That doesnt make it a shady establishment. Its too bad some people with an ax to grind have nothing better to do than make up phony reviews. Convicts? please. —snowgoat

2014-07-18 11:38:07   I was a bit worried as I saw some crazy reviews, but I think that must have been fake ones to discredit them. People ask "what kind of place charges for internet". Well, Ive been to 200-300$ per night hotels that charge an extra 20$ per day for internet. Motel 6 3$ internet is slow, yes, but more stable than most 150$ hotels Ive been to, and you'd have to pay for parking as well, while at motel 6 it is free. The desk space is better than most hotels. I have a desk and a sitdown table with chairs. There's an abundance of towels and a shower, the room is quite large and clean, and very calm. only the vent in the bathroom is noisy. but its only on when you are in there anyway. There's no breakfast, but you are in CA, so get your ass to Peet's :)