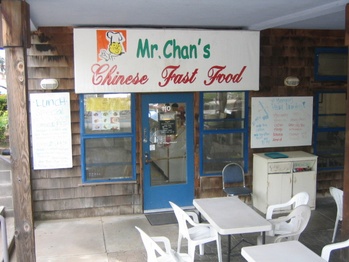 Mr. Chan's permanently closed in Sept/Oct 2006, and has since been replaced by Yummy Guide Cafe.

Mr. Chan's is a small fast food restaurant located just off campus near the Death Star. Until 2002(?), Hong Kong Restaurant occupied the building. The food is features the basics: beef & broccoli, sweet & sour pork, fried rice, chow mein, etc. However, it's inexpensive and the owners are really friendly. Really.

For something quick and filling, this place is okay. Typical cheap Chinese food. It's probably better early in the day, before it's been sitting for hours.

So, is there really a Mr. Chan?

This place has an obvious Christian connection: notices on the wall, the T-shirts, the music, the newspapers. They used to play soft rock but switched to Christian radio at some point.

Don't mind giving out a ton of personal information to shady credit card people? Then you might be able to catch a "Free Lunch" here when the credit card goonies are out — they often offer a "free lunch at Mr. Chan's" if you agree to sign up for their particular credit card. Be careful, though.

It appears that the following six comments are fake, posted by one person (potentially an owner or employee of Mr. Chan's, as they note that the credit card company has been changed). All of them appear to be from new accounts created for this purpose. If you wish to vouch for any of these, please do so. ( Note that Matthew Qu has posted a reply below, and these may well be legit ).

How facinating that Mr. Chans' most positive comments all happen to come at once via several people who just happen to all have one or two of the same IPs.. —JosephBleckman

It's worth noting that in all of the comments, which at surface reading have different writing styles, "it's" is written as "its" and "I've" is written as "ive." It's certainly possible they were all written by different people, but it does not seem very likely. — JosephBleckman

I was the one who noticed them, because they came from the same 2-3 IP addresses at the same times, with basically the same message in all of them. If anyone is at fault, it is Me. However, upon further review of the page, I saw that ChrystoriJohnson has the same IP as Matthew Qu, and KatieMiles with FannyYu. Additionally, the Comments JoesphBleckman removed were only the duplicate Comments added by MatthewQu, and AndrewLiu. On the final note, MatthewQu should not go about deleting other peoples posts and comments about his(or his friends') comments, and that they were legitimately under concern because of the IP addresses, and credit card information. I feel that it is more important to keep the comments of all parties, the support and critcism, and let more people decide, because there is a difference between vouching for comments and Stifling Debate. -MaxMikalonis

2006-01-10 18:55:43   While their fast food offerings can be iffy, their rice combos listed on the whiteboard behind the register are freshly prepared and slightly better tasting. —AndrewChen

2006-03-09 14:58:53   The one time I went (one being the operative word), the food was very cheap; however, the food was so flavorless and awful that it wasn't even worth the small price I paid. Ick. Go to Hoa Viet if you want tasty, inexpensive food close to campus. (mmmm...Hoa Viet...) —JulieEickhof

2006-05-03 21:47:52   Those 5 comments that were banned were from me and my friends who have ate there and came across this page and decided to support the restaurant. notice the differnt IPs. please put those comments back where they belong because they ARE all made by different people who have ate at the restaurant. —MatthewQu

2006-08-16 13:58:58   If you're not willing to go far off campus, and you want a ridiculously large amount of food for a low price, this is the place. I went with my vegetarian friend and got a special order vegetarian Ma Po Tofu with half noodles and half rice. It came out as a mountain of food. Don't expect much more than a full stomach though. —WinstonLee

2006-11-15 22:57:31   I've been to Mr. Chan a couple of times and I actually like it. The times that I've been there, I wouldn't choose the items that were already made and they would make it for me in the back. Maybe that's why my experience was more pleasant than others. —LenaLim