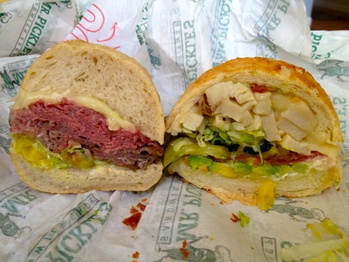 Got Beef and Mr. Pickles, both with everything

Mr. Pickle's is an awesome sandwich shop that used to be in Davis, but still has many locations throughout the Sacramento area. They make big sandwiches that are well priced for what you get. The Davis location was in Oakshade Town Center where Davis Creamery used to be. Mr. Pickles is not a real person, so don't go in there looking for him or you'll be in for some disappointment. The owners of the Mr. Pickles franchise are Frank and Michelle Fagundes. The owners of the Davis location were Bonnie and Mickey Mann, disproving the suspicion that it may in fact be the real Mr. Pickles. (In contrast, there really is a Mr. Coyote who owns Dos Coyotes).

Sometimes there was a giant dancing pickle out near the intersection.

A free cookie is given to those who purchase a sandwich. A low carb, low fat wrap option is also available. The "Tuna Tuna" sandwich with everything on a Dutch Crunch roll is over 1500 calories for a mere $7.25. But why stop there? Add in some Baja Sauce, Bacon and extra cheese and you surpass the 2000 calorie mark for under $10.

Mr. Pickles in Davis was forced to shut down in June 2020 after a racist e-mail was sent by the owner, Mickey Mann, to his employees that was widely shared across social media. The incident was sparked after Mann became upset that some of the employees were wearing Black Lives Matter pins to work in order to show their support. In the e-mail, he compared the Black Lives Matter movement to the KKK, stating "BLM is the flip side of the KKK. Their tactics are out of the Mafia playbook." The Davis Enterprise  wrote an article covering the closure and included some of the employees perspective of the incident.

2012-12-06 23:49:38   The employees are friendly and ensure your order is correct. The sandwiches taste great, and I really like their Dutch crunch rolls. Much better quality in service and food than Subway. —Kacarab

2013-01-02 12:32:00   Their sandwhiches are good, but the issue is they don't do "assembly line" ordering like subway or chipotle. So, there are two sandwhich makers helping one customer at a time, while the cashier does nothing. This makes it very difficult to get your order quickly...if there are 2 people ahead of you and 2 up at the sandwhich counter, you are looking at 15 minute wait (compare to probably a 5 minute wait at one of the places I mentioned above) —potsie

2013-02-17 12:37:05   All I have to say is, holy club sandwich! I have yet to order something I don't love from this place. Also, everyone is so friendly - and their catering sandwiches are surprisingly good too! —mooodavis

2013-04-30 12:37:05   Based on my one experience I would say Mr. Pickles makes a decent sandwich that is priced comparably to the Nugget. The "Mr. Pickles" sandwich was much better than the "Got Beef" and the Dutch Crunch bread seems to result in more fillings and less bread.—MikeyCrews

2013-10-25 12:20:58   The sandwiches here are really good and they have creative combinations. I love the free cookie and they occasionally have deals like soda's for 99 cents. The only gripe I have is the fact that they close so early so if you eat dinner later than 7 during the week or 5 on weekends, you're outta luck. —KathrynAzarvand