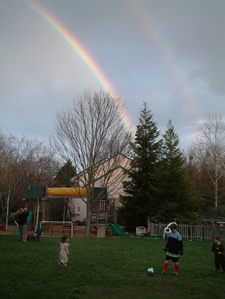 Double Rainbow over Muir Commons. WHAT DOES IT MEAN?! 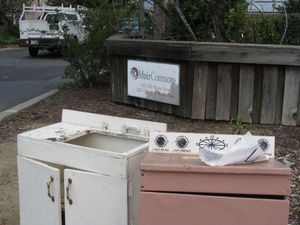 Muir Commons appears to be the legendary hidden graveyard where children's toy ovens go to die, causing John Muir to roll over in his grave. Muir Commons is located in West Davis and is a part of Aspen Development. It was the first cohousing community newly constructed in the United States and was modeled after communities in Denmark. After several years of planning, ground breaking took place on November 1990 with the residents moving in during the summer of 1991. Most of the homes were constructed as affordable housing.

Muir Commons is made up of 26 homes on just under three acres. Most houses includes a private yard and are available in one of three models ranging from 808 square feet to 1381 square feet. The clustered homes face a central pedestrian pathway while backyards face the outer edges of the site. Outdoor features at Muir Commons include a garden, an orchard, children's playground, lawns, and "nodes" to facilitate socializing. Landscaping includes many drought-tolerant and native species.

The 3,668 square foot common house includes a large kitchen and dining area for group meals. a sitting room with a fireplace, a children's playroom, an exercise room, a recreation room, an office, laundry room, and a guest room. Other shared facilities include a 900 square foot woodworking and automotive shop, parking areas, bicycle sheds, and a hot tub.