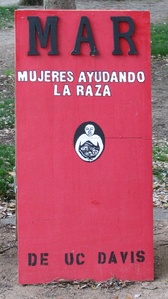 Mujeres Ayudando La Raza (MAR) in accordance with the University of California at Davis, have established this non profit organization for the purpose of creating a network of support for Chicana/Latina students. Our objectives are to promote academic excellence by aiding in the retention of our members in the university. MAR is also committed to the welfare of Chicanas and Latinas in the community as well as the Chicano/Latino population as a whole. Through our community involvement, we strongly encourage the awareness of culture and heritage. Simultaneously, as a SPAC organization, we emphasize the diversity that exists within the university and we strive to include all members of the community. MARs strives to accomplish these goals each and every year: to be a Latina support group; a network; and a member of the Chicano/Latino community at UC Davis. MAR is a non profit community service based organization at the UCD campus. With community service as a base, we work on two yearlong projects which take place in the Spring quarter of each academic year. This school year (2008-2009) MAR will be hosting their 13th annual Youth Conference which will take place on April 30, 2009 during La Raza Cultural Days week. The second major project is Migrant Camp in which throughout the academic school year MAR takes in donations in terms of clothing (shirts, pants, shoes, sweaters, etc of all sizes) and house appliances. At the end of the year, MAR takes these items to a local Migrant Camp, gives them to the community there and hosts a series of day long events. Other community projects include; participation in the Annual Breast Cancer Walk in Sacramento, Adopt-a-Family, Sister Nora's kitchen soup, Domestic Violence Awareness walk in Woodland and anything that comes up throughout the year.

There is also a Sacramento State-Chapter. 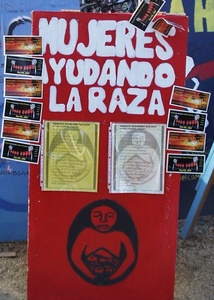 Mujeres Ayudando la Raza first started during the Spring quarter of 1990. As our first year of college life came to a close, we found a dire need for a support group. After observing other support groups, we did not feel our needs were met. What we were seeking was a year away from home was an experience that some of us wanted to share with other Chicanas and Latinas to build on some sort of support or network here on the U.C. Davis campus. By the end of the year, we all came to have a common understanding and the friendships that grew became a retention mechanism to ensure our roles as students on campus. Mujeres Ayudando la Raza was created so that the life of the Chicana and Latina at U.C. Davis would be academically stable, as well as being socially and culturally enriched. We are dedicated to creating enduring bonds of friendship and to share our strength by committing ourselves to the community. By June of 1990, we were determined to create a group that would meet our needs. Thus, we prepared to meet in the Fall of 1990. We registered our new organization with the University as Mujeres Olmecas. We felt this name was appropriate since it originated in Mexico and was the name of a native trive that meant "mother culture". As our constituency grew, we decided we needed a name more representative of our Latina members. A unanimous decision was made to call our group Mujeres Ayudando la Raza.

All meetings take place in SocSci 90 at 7pm.