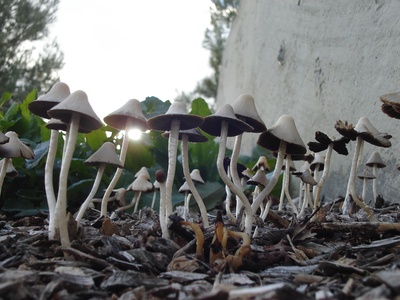 Mushrooms are the fruiting bodies of usually a substrate or wood dwelling fungus. These structures primarily serve as spore dispersal systems, usually for members of the group Basidiomycota. (However, there are notable exceptions to this rule in regard to some mushrooms such as the prized morels and true truffles.) Although mushrooms vary widely in shape, size and color, even among members of the same species, many generic mushrooms are characterized by the presence of a stem, cap and some sort of surface which spores are released from. These can range from the common gills, to pores (As in the prized boletes), to spines (as in the genus Hydnum, or the hedgehog mushroom), to folds (as in the chantrelles) to smooth surfaces which are indistinguishable from the rest of the fruiting body. There are some notable exceptions, such as the jelly fungi and coral fungi, the former lacking a stalk, and the latter lacking any sort of cap. Even within the archetypal mushroom type there is great diversity.

It is perfectly safe to touch any mushroom, even deadly poisonous species; one must ingest a poisonous mushroom to be harmful. People are often terrified of fatal mushroom poisoning, but in reality, only a tiny handful of mushrooms can kill a person. In Davis, three species of deadly mushrooms have been found: Amanita ocreata, Galerina marginata, and Pholiotina rugosa group. Two of these are small, less than 2cm across and thin fleshed, and are very unlikely to be eaten. That being said, take classes, learn from a wild mushroom expert, and be absolutely sure of your identification before eating a wild mushroom (or for that matter, any mushroom, other than the boring Agaricus bisporus from the supermarket). Unfortunately, tragic instance of mushroom poisoning occur regularly in Northern California, such as this occurrence in 2012: http://www.sacbee.com/2012/12/02/5024170/death-cap-mushrroom-looks-good.html and these in 2010-11: http://science.kqed.org/quest/2011/03/09/life-threatening-mushroom-poisoning/

The cool damp climate of Fall and Spring in Davis is perfect for the growth of fungus. In the Arboretum and all around the city mushrooms can be found at this time of year. Hopefully a mycologist will join the wiki and enumerate them all for us. However, if you are hunting edibles, one must go the the Sierras or Coast.

For information on mushrooms available in stores in Davis, visit Commercial Mushrooms in Davis.

You can also visit mushroom observer and Inaturalist to see pictures of many fungi in Davis.

Those looking for edible varieties should check out the Farmers Market, as there is one table full of nothing but various mushrooms. Those looking for the mood enhancing varieties should contact their local drug dealer. In case you are curious, the most popular active species are Psilocybe cubensis, Psilocybe semilanceata, Psilocybe cyanescens, Psilocybe stunzii and Gymnopilus spectabilis. Most of these are indistinct brown mushrooms which resemble billions of other uninteresting brown mushrooms, and a couple of deadly poisonous ones.

If you seek the absolute best edible mushrooms, your best bet is to somehow head to Coast during the late fall to early spring after the rains. The Sierras are also very fruitful in the late spring through fall, after the snow has melted. Some prized edibles you may find may include oyster mushrooms (Pleurotus ostreatus), chantrelles (Cantharellus californicus and Cantherellus subalbidus), boletes (Boletus sp.), candy caps (Lactarius rubidus), and morels (Morchella spp).

Those interested in a more scholarly knowledge of mushrooms can enroll in PLP 40 and learn how to grow your own. This class is given winter quarter. 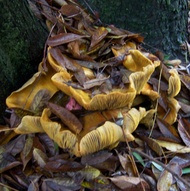 A Psathyrella sp. similar to P. candolleana growing in the Arboretum

Should I eat these?