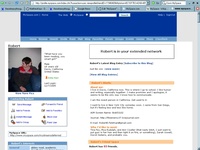 The MySpace profile of a Davis teenager

MySpace is a networking web-site similar to the Davis-specific site, DavisCoeds. While Facebook is perhaps the most popular national college networking site, Myspace is popular among Davisites because its access is not restricted to people affiliated with a university or high school.

MySpace is a web service that allows people to connect with other people. MySpace is known for doing one of two things: Making ordinary people famous, or making famous people ordinary. Users can search for friends via e-mail address, real names or display names. Users create "profiles" filled with their various intersts, a biography, a selection of their eight favorite MySpace users and who they want to meet. Also visible on this page are comments left by other MySpace users.

MySpace is also notorious for letting users of the service use arbitrary HTML and CSS in their profiles. This results in many hard-to-navigate profiles (animated backgrounds, crazy colored text), and lots and lots of music embedded in pages.

In July of 2005 MySpace was purchased by News Corp. for $580 million. News Corp. is, as you may know, the parent company of the New York Post, The Sun, and Fox News Channel.

2005-05-29 23:42:23   MySpace has been described as "just another way to annoy your friends" by my friend Andrew. I find it's so-so. I keep in touch with my family a little better, my funny cousins have MySpace. But for the most part it's just a weird place that people go crazy on. Tom is a douche and edited profiles that stretch out my Firefox window are doubleplusCRAP. I prefer the good ole EL JAY. —The Vacavillain

2006-04-11 03:59:28   I'd just like to point out that the XSS exploit that Samy used to become the most popular man on the internet was actually a problem with Internet Explorer, not MySpace. MySpace was correctly filtering javascript, IE however was doing stupid things like ignoring newlines in the middle of words (javascript in this case) allowing him to get around the filtering. The flaw didn't run if you visited MySpace with an alternative browser. MySpace had to add more filtering as a result of Microsoft's code doing stuff it shouldn't have, basically writing a hack to get around a bug in someone else's program. So its really not fair to blame MySpace for the problem. Also, Samy is my hero. —ZacMorris

2006-12-11 16:25:06   Yeah, the explanation of the self propagating worm was awesome. Keep in mind face book isn't limited to UC people anymore —StevenDaubert