Nameless Magazine is a student-run online and print publication aimed at creating and fostering a liberal arts community within the undergraduate population at UC Davis. Founded in Spring Quarter 2007, Nameless has since expanded its publications to include quarterly online issues and yearly print publications featuring a selection of the "Best Of" submissions from each academic school year. The motto, "Anything That Tells a Story", reinforces the idea that Nameless is a publication for all, dedicated to letting students share their stories, whether through poetry, prose or visual arts.

The idea behind the name is that the magazine represents someone you know or would like to know – Nameless seeks to break out of the mold of traditional publications, and just produce a forum for creativity that possesses all the traits of a best friend: open, fun, helpful and readily accessible.

Nameless accepts submissions from all undergraduate (and graduate) students from UC Davis. Unlike other publications, it focuses on forging relationships with writers and artists rather than simply worrying about editorial and logistical details. Nameless is first and foremost dedicated to promoting the underrepresented literary and arts community at UC Davis. Editing meetings for each board focus on compiling thorough critiques of each submission; the writer, poet, or artist will then receive a comprehensive critique along with an acceptance, rejection, or suggestion for resubmission from each editing board.

Through the support of UC Davis' English Department, Nameless offers 1-2 units of internship credit to students who are selected to serve as editors on each of the three editing board: Fiction Board, Poetry Board, and Mixed Media Board. Internship credit is also available for students who serve as part of the Editorial Board. Students interested in becoming more involved with the inner workings of Nameless are encouraged to apply for open positions generally available at the end of each academic year. The Ed Board consists of both the literary magazine's lead editorial staff and the student organization's board members:

The Editorial Board works together to ensure that Nameless functions seamlessly as both a student organization as well as a literary & arts magazine. 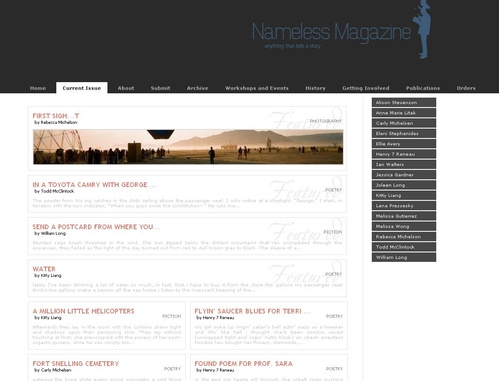 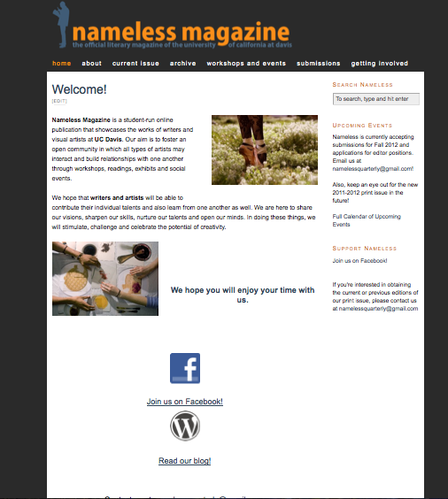 2007-10-06 16:23:35   "Nameless" is in no way affiliated with ASPAPERS — it's completely student-created, student-run, and student-oriented. Woohoo! Thanks for fixing up the wiki page! I would love to put the current cover art, but since it's an online publication it will probably just be the current issue's featured art. —KarenM.