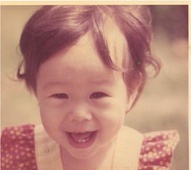 Mrs. Takesono Flowers was born and raised on the island of O'ahu in Kane'ohe, Hawai'i. After attending the prestigious Punahou preparatory school, she attended Tufts University in Boston, Massachusetts where she received her B.A. in Music.

Nicole first visited Davis with then-boyfriend Adam Flowers for the Whole Earth Festival. It didn't scare her away. She returns often with Adam (now her lucky husband) to his parents' home on San Marino Drive for Sunday dinners and to his sister Michelle Azevedo's old house on Calder Court in Wildhorse before she and her family moved from town. She enjoys the Davis Farmer's Market, Mustard Seed, and walks on the Putah Creek Bike Path with Adam's parents' dog, Buddy.

Nicole is a Keever Kompadre

Nicole and Adam looking confused after their nuptuals in Napa-2004

Nicole in her "Corpse Debutante" costume for Eugene Onegin at San Francisco Opera, 2004