The Nishi Gateway Project is a proposed development plan for the agricultural Nishi Site between the I-80 Freeway, Union Pacific Railroad, and across Putah Creek from University Park, adjacent to Rocknasium, University Park Inn and Suites,  If approved by Davis voters, the Nishi Gateway would include business space as well as housing for more than 1,500 residents and 325,000 square feet for research and business facilities. The Nishi Gateway was on the ballot in June 2016 through a Measure J/R vote, as Measure A. It was defeated by a "razor-thin margin."

Conceived by developers during years of negotiation, the Nishi Gateway is a collaborative plan between Yolo County, the City of Davis, UC Davis and the development group. Developers claim It proposes to provide environmentally sustainable housing for Davis students and families close to the UC Davis campus and downtown, but the housing could as easily be occupied by I-80 corridor commuters. Proponents of the project claim it creates innovative Research & Development space, expands cycling and walking paths connected to the UC Arboretum, and  creates buildings that qualify for LEED green certification. Developers also claim the project creates potential economic benefits for the Davis community including Nishi is set to provide a 30-year revenue stream for the Davis Joint Unified School District and will help fund city services. Although it will also generate new students for the district and create new infrastructure that the city will be force to maintain.

The developers have hired an outside PR Firm, Spafford & Lincoln to push the project. Spafford & Lincoln has several paid field operatives attending forums and tabling at the farmers market and are maintaining a social media presence, 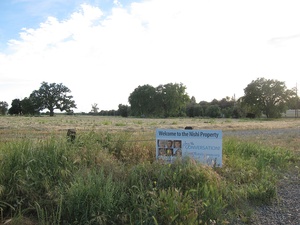 Sign in front of the Nishi agricultural land almost visible from the bike path in April 2016. 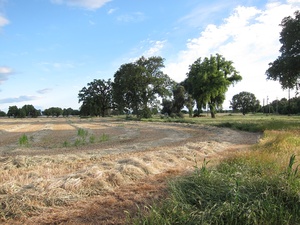 The agricultural land in April 2016. 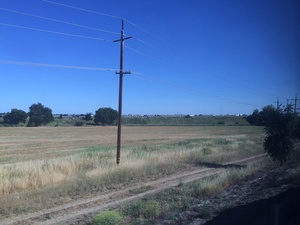 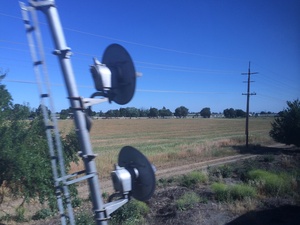 Because of the difficult location this long narrow triangular parcel sandwiched between Putah Creek, I-80 and the Union Pacific Railroad has long been considered undevelopable.

In 2008, the City of Davis Housing Element Steering Committee recommended that the Nishi Gateway site be developed with high-density residential housing through a cooperative plan for development with UC Davis.

In November 2012, the City Council approved a Pre-Development Cost Funding and Negotiation Agreement for the Nishi Gateway site, with the goal of planning the site as a mix of university-related research park development complemented by high density urban housing.

In 2014, the City was awarded a grant from the Strategic Growth Council (SGC) to assist the City with the planning and design of the Nishi Gateway Project with a focus on sustainability and green development. [citation]

In November 2015, the Davis City Council indicated its intent to move forward the process that would put the proposed Nishi Gateway project on the June 2016 ballot. [citation]

Articles and Op-Eds regarding the Nishi project

Note: The older the article, the less likely it is to be accurate as per the current situation

Just received an unsolicited email from the Nishi group "Davis for Nishi Gateway" at <[email protected]> telling me why I should support their issue. I have no idea how my ucdavis.edu email address made it onto their mailing list. I find it pretty annoying getting emails like this. If they want to get the support of the community I suggest they avoid spamming the community. --Eric Jensen